You were wanting another rodent post in your life, weren’t you? Don’t worry though, it’s not as traumatic (or hilarious) as last time.

For the first time ever we decided to sign up for a farm CSA through WSU Organic Farm. Our first pick-up is this Friday, May 29th and we are very excited!

I decided to go with a full-share, meant for 4-5 people, rationalizing that a vegan and mostly-vegan pescetarian eat more vegetables than the average person. Stay tuned.

Back to Voles. If you’ve never seen a vole before, think of it as the cutest rodent ever. With ears tucked back and into their fur and small beady liquid black eyes–think Wes Borland–they have us right where they want us. Ready to surround our ankles at a national park while eating lunch to eventually running for global domination.

We would never see it coming.

But they got too aggressive recently and I’m onto their ways. I’m watching you.

Share owners were notified in our latest WSU Organic Farm newsletter that there would be no snap peas this week due to a crop failure.

“We have also had our first crop failure…the snap peas were ravished by the voles.” 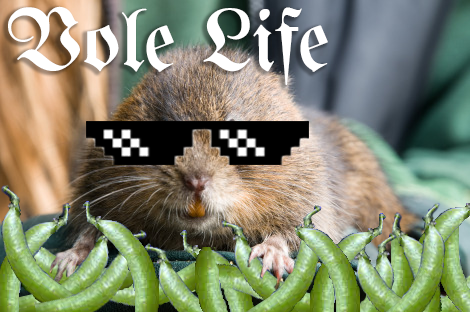 If they were ravished that means they were good. Really good. I look forward to the other really good crops that wasn’t ravished. In the meantime, voles are like, “no snap peas for YOU!”

Other reasons why Voles could take over the world [source]:

Have you experienced a crop failure or bought a CSA? What’s your favorite thing about a CSA?