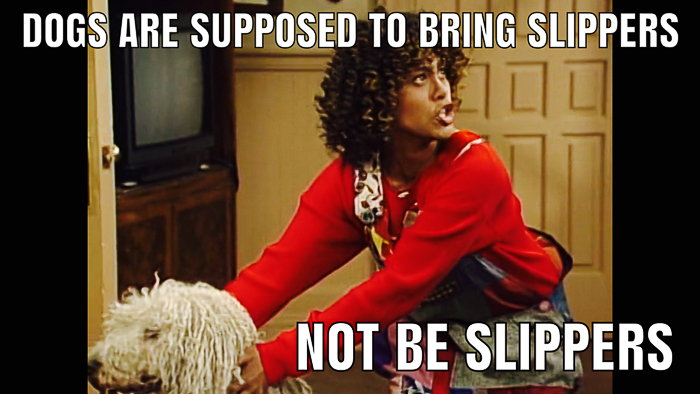 Slippers made from dogs?

Winifred ‘Freddie’ Brooks, the world-saving, animal-loving, hippy dippy moon child from the 90s TV show, A Different World (ADW), was a wonderful character. She was an activist before I knew what activism was. She yelled and asked for change in the world at the top of her lungs to any and all around her. Every week was a new passion and a new battle to be fought. She attempted to shift and diminish ignorance one episode at a time.

I was five when the show premiered in 1987 and eleven when it ended, so I honestly don’t think I watched any of it when it was on air. Thank you reruns! I do remember in middle school and high school waking up incredibly early at 5 a.m. to get the first shower at our house, which meant I had a lot of time to sit around before school. Right after the shower and before getting dressed I would curl sit in the basement surrounded by junk, wrapped in a towel, with asbestos pipes above to turn on channel nine (wgn) and voraciously watch the 5:30 a.m. and 6 a.m. reruns.

A Different World was my jam. It was and is almost as important as Anne of Green Gables when I think of my growing up years. The show, though a ‘light-hearted’ thirty-minute comedy, covered very serious and important topics. Topics like sexual harassment, racism, date rape, alcohol abuse, domestic violence, stereo-types, age-ism, homelessness and feminism to name a few. These matters are sensitive to begin with and how a show managed to cover it with such grace, let alone a half-hour time slot, seems like magic. Really, it’s brilliant creators, writers, and actors making it all happen so seamlessly.

The above meme, is from season 5, episode 20: Sellmates. The episode was really about Ron meeting his ‘business’ partner equal, a match made in swindler’s heaven. He worked as a car salesman and the owner of the dealership he worked for also owned a factory outside of the United States that turned dogs into slippers. What?! I know. One sub-plot was Freddie gathering people and picketing the showroom (while Ron was working). She also brought in a dog and told the owner, while covering the dog’s ears, “Dogs are supposed to bring slippers, not be slippers!”

Freddie excelled at sleuthing. She knew what companies were up to and where money was being funneled through shell corporations and in this case who owned what. How did she do all of this without the internet?? It boggles my mind.

My intention with Micro Representations is to show these little snippets from media that shed light on the veg world. Sometimes it’s enlightening and sometimes it’s unflattering with overrepresented stereotypes, but I believe these little moments are like snowflakes in a snowball that keep sticking together, turning into something bigger and bigger year after year. Before re-watching the series I wouldn’t have remembered or thought that ADW might have influenced my veg-focused adulthood. I like thinking it did.

Where to watch A Different World?

There was a time after reruns stopped and before streaming services were available that I’m sure many just forgot about the show. I had such a craving for it at the end of last year that I tried and tried finding DVDs for sale—like a full season boxset—just something so I could re-watch it. I then found it on Hulu+ making it the third time I’ve come back to Hulu+. The best news yet? ADW is landing on Netflix Sunday, March 15, 2015. That means ad free binging at its finest! Have fun. 🙂