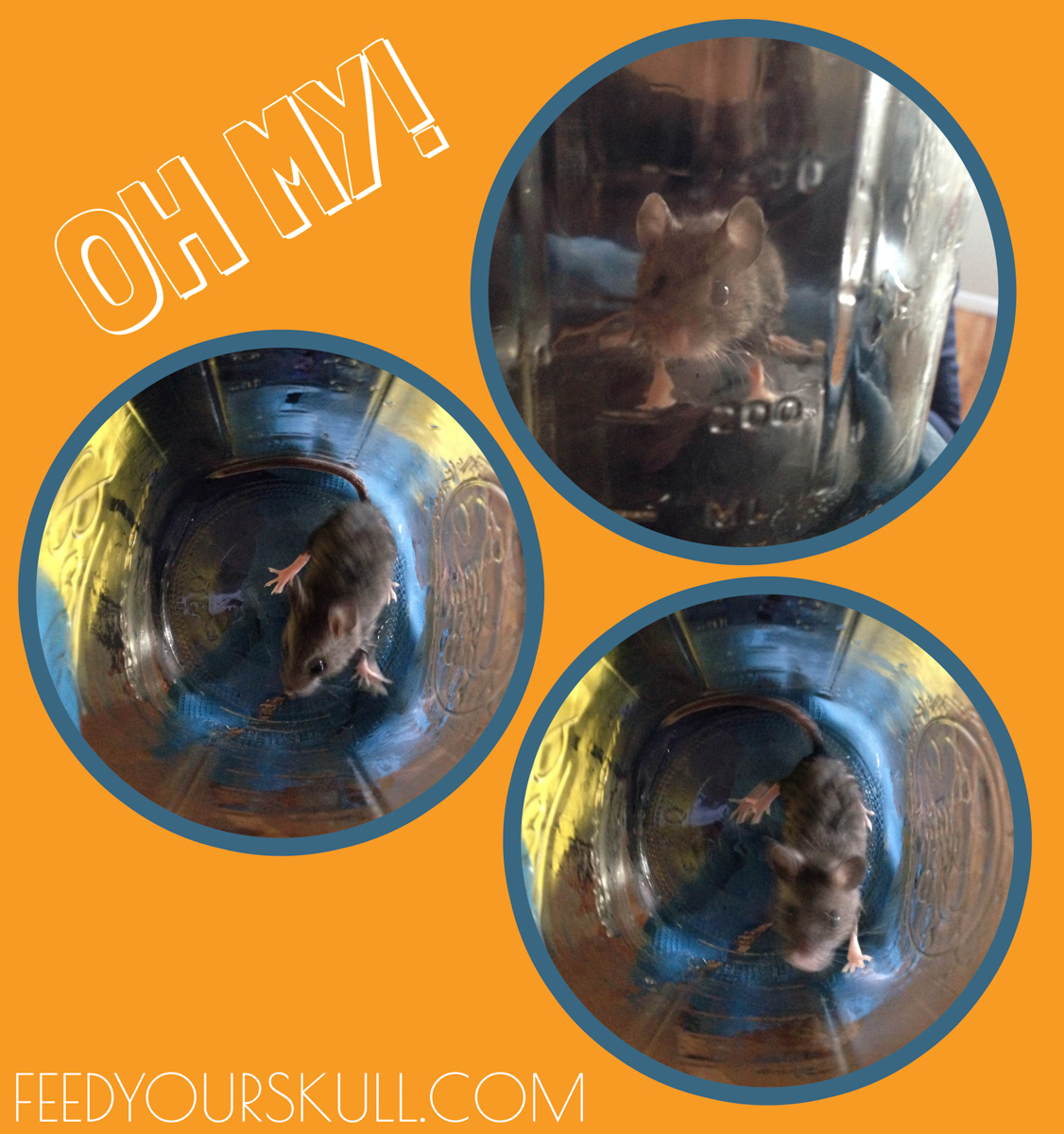 Certainly animal rescue begins in your own home.

We’ve rescued a hawk that flew into our window. I’ve relocated about 50% of the spiders in our house. We feed and cuddle with our neighborhood’s stray kitty.

When presented with the opportunity, rescue happens.

Today I wasn’t sure a rescue was in order. I’ll get to what happened but I’ll be the first one to say I really REALLY didn’t want to rescue this very lost animal. I wanted to pull a lever and let nature take its course.

Any guesses yet? I swear on all the bees that this is not an April Fools’s joke but an event that actually took place in our home this very morning.

I was in the kitchen making my smoothie when that feeling came upon me that it was time to do what many of us do every morning.

So… I went to the bathroom. As I was finishing up and wiping, I heard a bubble and another bubble, almost a splash.

Well, the first place my mind went was that our toilet sometimes runs a bit after flushing and I thought maybe there was a bigger issue like water coming back into the bowl or something.

I was one wipe from done when I looked into the toilet and I saw a TAIL! I didn’t think it was a tail at the time—oh no—I thought it was a leech splashing around. Makes face.

Why a tail or a leach would be in a toilet bowl—I have no idea.

I squared my nether regions back on the throne, heard another splash and felt something brush my thigh.

AND I SAW A MOUSE. THERE WAS A MOUSE IN OUR HOUSE, specifically our toilet.

Might I add, what a shitty day for that mouse.

I finished up and pulled my pants up and put the lid down because the poor guy, rightfully so, was trying to jump out.

I stared at the toilet handle with my heart racing wondering what my next step was. Should I just flush? It would be so easy. No thought involved. He awaited the destiny that awaits us all – compost.

But I couldn’t. The poor guy was shaking something terrible, I just couldn’t.

What kind of vegan would I be if I flushed this living breathing terrified creature to a watery grave? So, I took this insane moment in time as an opportunity to practice being better than what I wanted to be at that moment.

I also decided at that very moment I had maintained any demeanor or sense of calm and composure for long enough.

I turned around and ran screaming through the house, screaming anything and everything. Yelling to Jeremy that a mouse and I have just had the worst day of our lives—the little guy at the worst end of the deal. Yelling that I swear this isn’t April Fool’s, but who would really believe me?

Jeremy, who had just gotten out of a nice hot shower explained he had to put clothes on. No time for that.

I grabbed a mason jar and gloves and headed back to the bathroom.

I lifted up the lid and spied the mouse directly under the rim’s edge and out of the water. Smart guy. 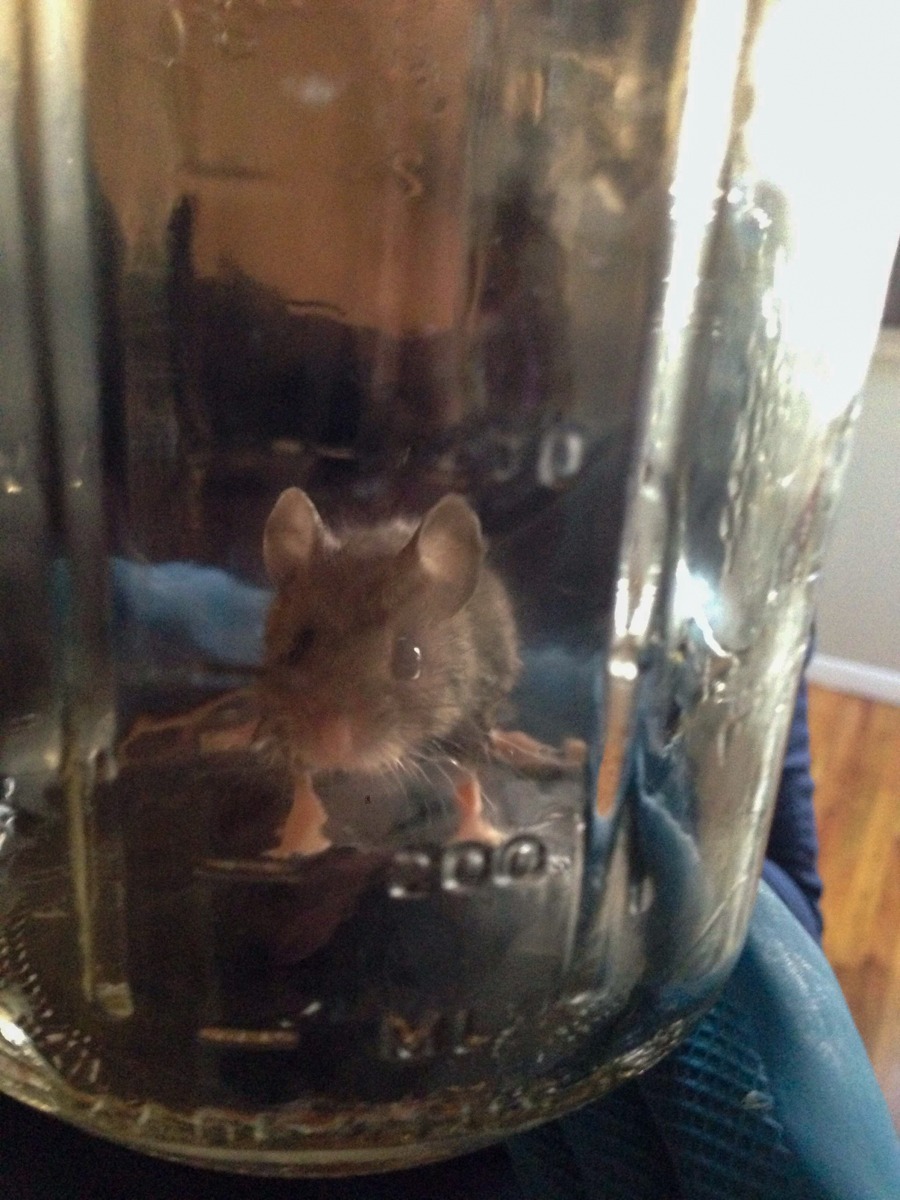 I was Superman quick, plucking him out and placing him gently in the jar. Of course documentation had to happen. I could barely believe it was happening, would you?

He’s the cutest damn mouse I’ve ever seen. Looks straight out of Ratatouille—although those are rats.

I took this sweetheart into the backyard, set the jar down, and waited for him to leave. It took less than a minute. He scampered through the grass and under evergreen trimmings with heart palpitations that shook his whole body.

Today he might become hawk, owl, or kitty food but he would certainly not be going to the treatment plant. An animal rescue—of sorts—took place today.

Reactions? Would you flush or friend? xo