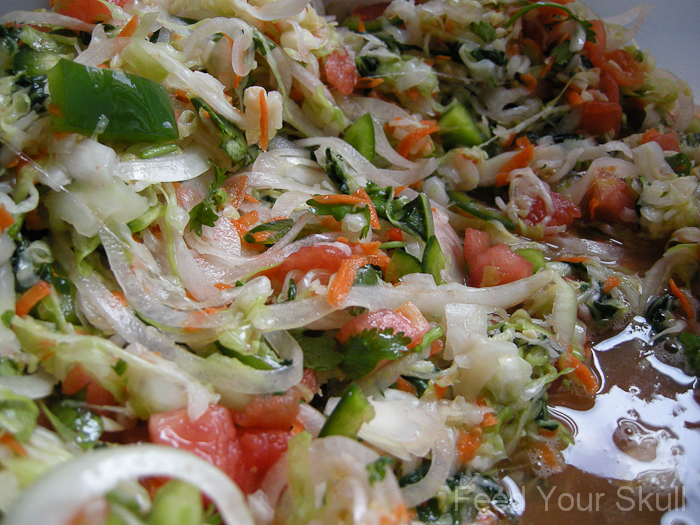 I realize that it has been forever since I’ve shared a sauerkraut recipe or even given updates. I’m sorry about that and I assure you I am still here fermenting away.

It has been a slower year of sauerkraut production mainly because I was gone the beginning of this year to stay in Illinois for close to 8 weeks. When I returned home (it was Portland at the time), I made a batch almost right away. After I opened it, it was so close to when we were deciding to move that I put off starting another batch.

Once we settled into Pullman I was back at it. We aren’t at sea level or in a moderate climate, but so far I don’t think the 2500+ increase in elevation has affected the process. I’m still gauging the process, with one batch under my Washington belt.

I’m going to hang onto a few of the ‘batch’ recipes and start sharing more recipes of how to use sauerkraut other than as a side.

I would like to compile my ‘how to’ resource, batch recipes and meal recipes into a complete resource for fermenting enthusiasts like myself.

While I work on this ambitious project, here are a few updates. 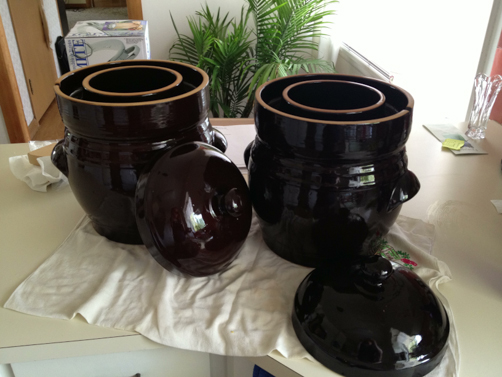 Ever since I bought my 5 liter crock I’ve been playing with the idea of a 2nd crock, but put it out of my mind for over a year now. Shortly after we moved to Pullman I was searching Craigslist for stone, specifically large, slabs to use in food photos. I had saved the search and would check it every few days. One of those days, I happened across a post for 2—that’s right—2 fermenting crocks. 10 liters each. Holy hell.

When I saw they lived almost 3 hours away in Oregon I was very disappointed.

Stumbling across a rarity like that on Craigslist, I was sure we were destined for each other. They were listed at a very affordable price compared to new, plus one was brand new and the other had only been used once. But 6 hours total of driving.

We texted and I expressed my hesitation at the driving. Turned out they were heading to Spokane that weekend and we coordinated to meet at a rest stop on their route leaving us with only 3 hours driving time total. Challenge accepted.

She joked via text how they wouldn’t murder us and I reciprocated the promise (totally reassuring-right?). We exchanged descriptions of our cars. Theirs was a van. Eek.

Guess what? It all worked out great! We woke up at 3 in the morning to drink coffee and wake  up so we would get there on time–about 5:30 am.

Above are my 2 new-to-me crocks. Their names are Londo and Castiel. Points if you know the inspiration behind the names.

Moral: Trust in humanity. Even if it’s the middle of the night to meet a van at a truck stop. 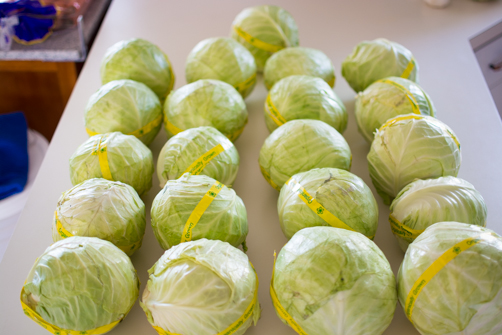 It seemed like a good idea, I swear. I wanted to make one new batch of sauerkraut in my 5 liter and then double or triple a batch recipe that I’d already made and fill 1 of the new crocks. I chose Salsa Sauerkraut.

I thought I could triple the batch because when I made it before it reduced by half during the ferment—I think due to the tomatoes and herbs—and it would be going in a 10 liter crock after all.

Hmmm. Good note for next time—don’t do that. Thankfully we had the 2nd 10 liter crock and an extra 10 pounds of cabbage. Yes, even I’m still learning.

Good news. I will have A LOT of sauerkraut for recipe development, probably have some sauerkraut themed dinner parties, and neighbors will be able to enjoy some of the bounty. 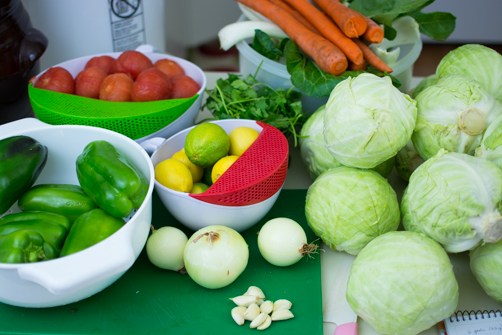 Here’s what I started with. I followed most of my rules and kept it 80% or so organic. I was unwilling to buy/find organic tomatoes and green peppers.

I also figured out that when shredding that much cabbage the food processor is the best way to go. I didn’t accept that lesson until the last 30 minutes, close to 1 am.

I’m really excited to open these a few weeks from now because the salsa batch was truly exceptional and opened my mind to the possibility of other ‘mixed’ veggie ferments. 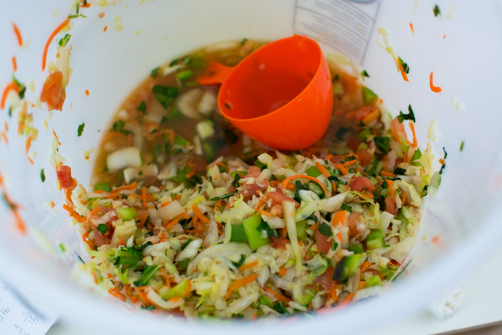 I won’t let the sauerkraut take all the blame, I did have 2 glasses of rose moscato wine, but still. I was on my feet for most of the day (with some procrastination in the beginning) and I was exhausted.

After kneading and massaging close to 35 pounds of cabbage over a few hours—by hand—I was convinced I had walked in the shoes of someone with arthritic hands.

By the time the crocks were set, gutters were filled, and I was tucked into bed, it was nearing 2 am.

The next day came, I had a headache and was still exhausted so I took it easier and skipped my 4 mile walk for a day. By the afternoon my hangover had subsided and I was feeling much better.

The real hangover ‘feeling’ came from the smell of my hair and jeans. Do you remember what it was like to be in a bar for several hours on a Friday night before they banned smoking inside? You come home and your hair, clothes, and every single orifice reek?

That’s exactly what it was like except I smelled of sauerkraut.

Now, I love my sauerkraut but having my hair and jeans—I sniffed them repeatedly—smell of cabbage and onions was a whole new level.

Thanks for reading and I hope you’ve had a great weekend! xo

What have you been fermenting lately? Jeremy has also jumped into fermenting and is on his 3rd batch of beer. The first was an IPA, not very hoppy but it’s good! The second and third are still brewing – an imperial stout made with chocolate malt and a porter in which he used a few tablespoons of my homemade vanilla extract and beans. The wort was amazing so I look forward to both of these in a few weeks.