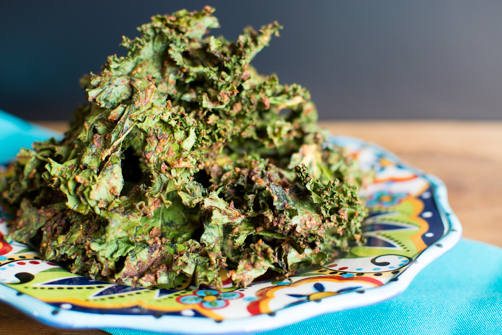 We have been in kale chip bliss the last few weeks with varieties like French Onion Kale Chips, Taco, and Ranch Kale Chips (both coming to FYS soon).

I asked you on Facebook last week which recipe you wanted first and it was very close but BBQ won! So here we are with Sweet Hickory BBQ Kale chips.

I’m glad kale chips have made a come back in our house because as of late we have been buying way too many chips and crunchy snacks at the store (ugh). It wouldn’t be so bad if a bag lasted a week but chips are often devoured in one night. I’m really seeing that we (I) can’t do moderation of those kinds of snacks, they just can’t be in the house to begin with. That’s where kale chips come in. They satisfy the crunchy snack desire and as I’m finding out can be made in all of our favorite flavors. 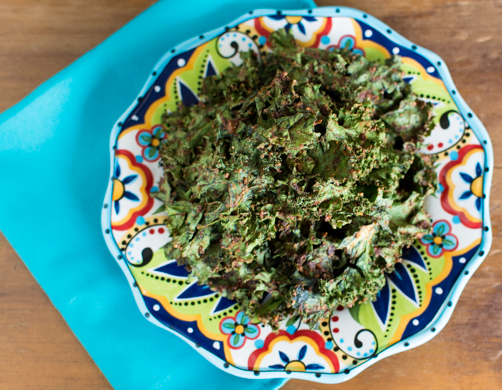 Even if they are consumed in mass quantity like regular chips, I can feel good about eating 2 heads of kale. 😉

This recipe uses whole natural foods to make up the bbq flavor like sun-dried tomatoes, acv, molasses, maple syrup, liquid smoke, and onion. It was my first time using liquid smoke which helps nail the hickory flavor and I’m happy to say it was successful. I’ve since used it in a split pea soup to replace the ham bone and the results are crazy good. 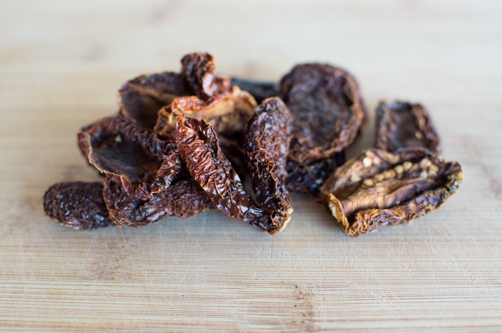 I’m still going through some sun-dried tomatoes I ordered several years ago, in bulk, and they are great in all sorts of recipes. They are hard out of the bag but soften when soaked in boiling water. 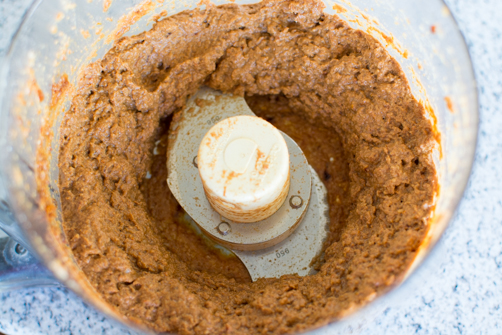 You can blend the ‘coating’ in the food processor or blender. 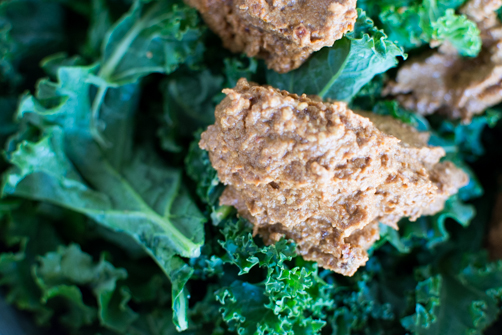 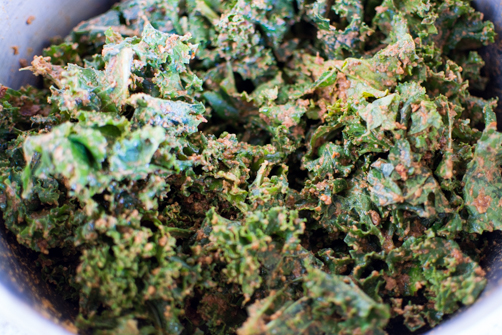 Just like the onion chip coating, the bbq coating makes a great dressing. I’ll need to remember that all of these will easily make a perfect kale salad. 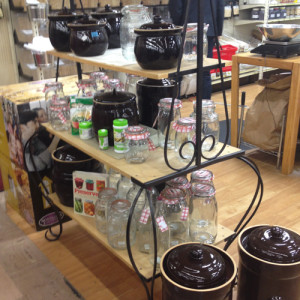 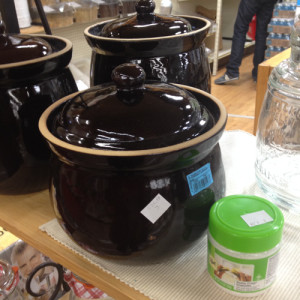 1. Our Ace Hardware store had the most epic display of crocks—mostly because I’ve never seen a display of crocks before.  I just had to buy the little one on the right, I’ve since found out it’s a pickle pot, but I still need to do more research. It doesn’t have the gutter seal that my bigger crocks have. 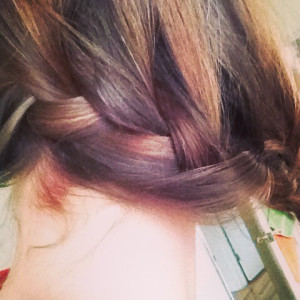 2. I’ve been practicing my side/wrap around french braids and I’m getting better with each attempt. I don’t know what I’d do without my favorite YouTube beauty gurus as braiding was never a skill I picked up in middle school. 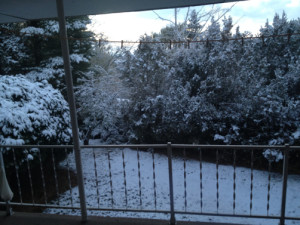 3. We’ve gotten snow a few times in the last 2 weeks. Nothing that’s stuck, but this past Friday’s offering is still partially around. I begrudgingly admit to missing Chicago’s winters after being in Portland for 2 years. I think eastern Washington will do us good. 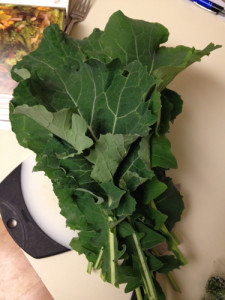 4. Our collards are still growing/thriving in the cold and snowy temps. They are close to the house but I’m still super impressed with their hearty nature. I used these in a stir-fry.

5. I finally got a professional hair cut this week! I loved it and am happy to have found a place and stylist again. I realized when I set the appointment that in the 2 years I lived in Portland, I never got my hair cut there. Funny enough, the above pic is the before picture. I got about 2 inches chopped and some layers so it looks similar but healthier. 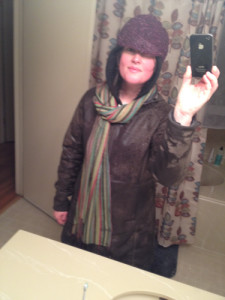 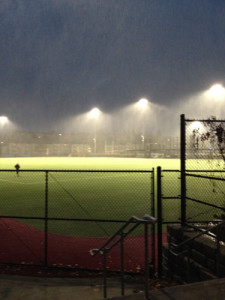 6. I went for a walk during the sleet/rain part of the snowfall because I’m bad ass that way. After almost 4 miles everything about me was soaked. I leaned forward to get the mail and massive amounts of water poured off of me. Needless to say a hot shower felt amazing. 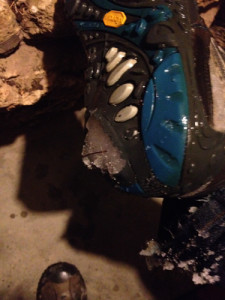 7. My Merrill’s that I’ve had since 2010 finally gave out. These shoes began our adventure in 2011 with backpacking in Europe, a couple of days of 15 mile walks through the French/Spanish Pyrenees, and subsequent hikes and living in Portland and now Pullman. Apparently a big chunk of shoe came out of the hole that’s slowly been growing. So snow and ice found a home creating a big bubble in the heel. Pretty comical. 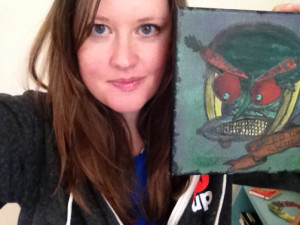 8. Thank you Friggin Boom! My painting arrived this week and I LOVE IT!. Friggin Boom is a YouTube channel by, Australian, Scott Hillard. He does 2 really neat art related things through his channel. One (the one I did), you paypal him $25 and a guideline of what you want him to paint and he does it. The second art related project he does, you can donate art you’ve done and he auctions it off on eBay (called the boom project), the proceeds go to a charity he’s chosen. Very cool stuff. 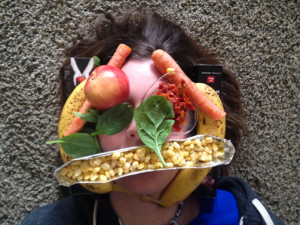 9. Here’s me. Life imitating art that’s imitating art. I tried SO hard to not laugh while Jeremy was piling food on my face but it was very hard. If you want to laugh, I highly recommend laying on the floor and putting random fruits and vegetables on your face. 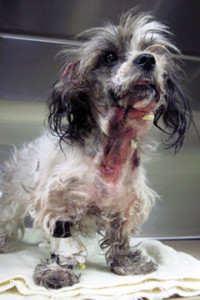 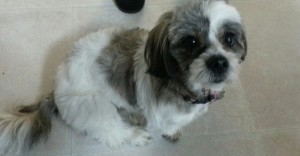 10. My friend’s from the Zhang dinner post adopted a dog from Dire Straights Animal Rescue today and I am SO happy for them! Her name is June Bug and she is so lucky to be finding such a good home. She was dragged behind a car but thankfully is well on the road to recovery. They are both lucky to have each other. We look forward to watching her and Sugar next September!

Hope you’ve had a nice and safe weekend! Any snow or storms where you live? Between what’s happened in the Philippines and the tornado today in Illinois, I couldn’t be more grateful for absolutely everything. Here’s to a better week ahead. xo