If there’s one thing I’ve learned this last year while being 100% plant-based is that, there are always options. They might not be the million options you’re used to but there are still options.

When we moved from Portland in July we headed out on a Friday night with Jeremy driving the rental truck and me driving our new car. We planned on leaving early evening because absolutely everything would be packed and loaded and we could drive 2 hours, getting a head start on our 7 hour drive.

I don’t think it’s ever happened that Jeremy and I have been on a road trip together but in separate vehicles. It was a strange experience. Add to the fact that before that week we had been a car-less family for over 2 years.

Even with the burden of a new car loan, driving away that night felt like freedom.

Knowing that you can figure out a menu choice at any restaurant also feels like freedom.

So we drove from Portland to the edge of The Dalles that night and we were tired. It had been a long day of being on high-alert and normally I would say we might have had something packed to eat or would hit a grocery store and throw something together in the hotel room.

Because tired won, we decided to eat at the restaurant attached to the hotel we stayed at—a Shilo Inn. 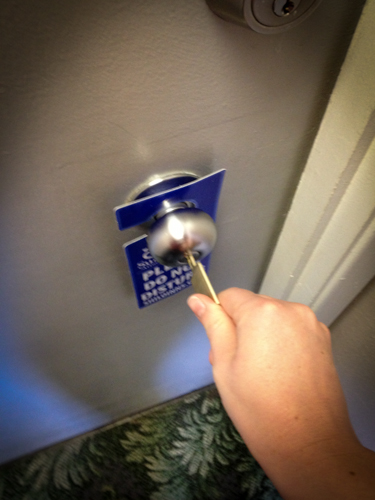 First things first, we had to go pee and drop off our backpacks. Would you look at this? When was the last time you used an actual key to unlock a hotel room? I don’t know that I ever have. I was probably a kid the last time I saw one. 😉

I’ll be honest, this hotel has terrible reviews online—maybe because we’ve stayed at a million hostels, have backpacked, and like to camp—but this hotel was just fine. It was old but clean, had a nice staff and we slept well.

We went into the hotel restaurant and there were a few people eating and a large group drinking. It was nice.

There are a row of booths along the wall with huge open picture windows that look out towards the dam. It was dark but you could still tell it was a great view.

The waitress came over and we ordered drinks and then perused the menu some more.

First tip. When there are no specific ‘vegan’ meals and everything has cheese or meat – start looking at what comes with those meals, like grilled veggies, fruit, and what kind of salad fixings.

With a little creativity and not a lot of work for the kitchen you can come up with some pretty tasty options.

I figured I could put together a sandwich with some veggies and fries. Fries are always good. 😉

The waitress was super friendly and knowledgable, when I asked if it would be possible to put together a sandwich with veggies as I don’t eat meat or dairy, she didn’t even bat an eye, she asked me if I would like them steamed or in butter. How great that I could get them steamed?? 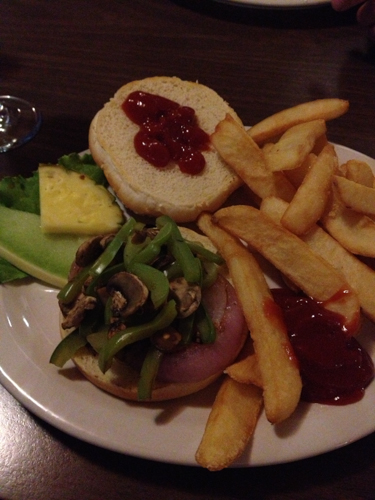 So I had a sandwich filled with steamed peppers, mushrooms and onion—and let me tell you it was heavenly. The fries weren’t bad either. 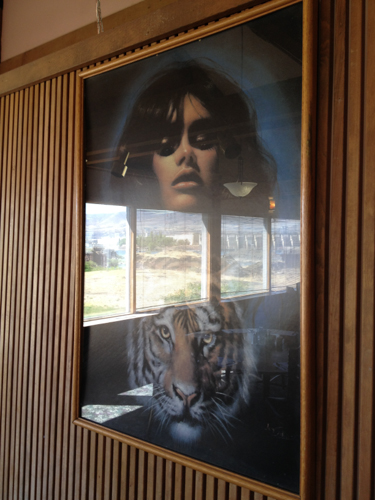 The light of the next morning brought about sights we had missed the night before, like this amazing painting of a woman and tiger. A friend on Facebook requested we steal it for him, we did not oblige. 😉

Our stay came with a complimentary breakfast though it wasn’t your usual dried cereal, fruit, bagels etc – one was an egg dish and one was biscuits and gravy. Biscuits and gravy wouldn’t have appealed to me even when I ate some meat.

So, I ordered oatmeal and orange juice. It wasn’t a tofu-potato hash but I do love oatmeal. 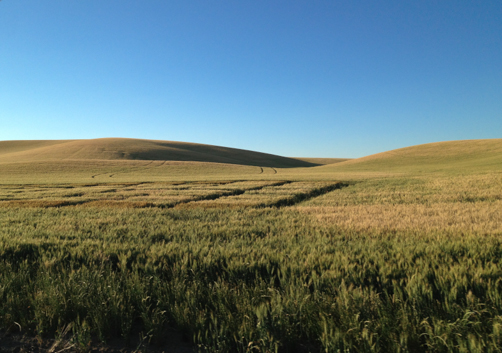 I would love to hear what tips you have for eating out while on a road trip or long-term traveling? Any meals that have surprised you?