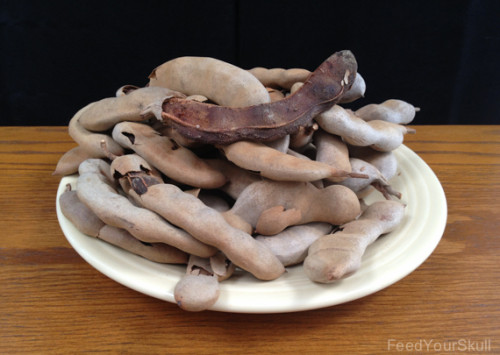 I’m back with a post I’ve held onto for a long time, how to make tamarind paste. I made this particular tamarind paste all the way back in April!

Why didn’t I put it on FYS?

Well let’s just say I’m not thrilled with the photos and I also didn’t get to make many dishes with it before we left Illinois, so this lovely paste is still in my friend’s freezer, unless she’s thrown it away 😉

I decided to post this anyway! I know without a doubt I would make it again, so that means I have to share it.

If you came via yesterday’s post and learned all about my favorite grocery store, Cermak, you’ll know I picked up these pods from their dried food section. I had never seen them before and wasn’t quite sure what to do with them. I spent some time on Wikipedia and read several ‘paste making’ tips before just getting into what would work for me.

I will give a word of caution—to make this—I think you’ll have to like doing the DIY route to begin with. Some parts are a little tedious and may take a while but the end result is delicious and if you’re still like me, you probably LOVE learning new things about new things.

What are tamarind pods?

“The tamarind is a long-lived, medium-growth, bushy tree, which attains a maximum crown height of 12 to 18 metres (40 to 60 feet). The crown has an irregular, vase-shaped outline of dense foliage. The tree grows well in full sun in clay, loam, sandy, and acidic soil types, with a high drought and aerosol salt (wind-borne salt as found in coastal areas) resistance.

Leaves are evergreen, bright green in color, elliptical ovular, arrangement is alternate, of the pinnately compound type, with pinnate venation and less than 5 cm (2 inches) in length. The branches droop from a single, central trunk as the tree matures and is often pruned in human agriculture to optimize tree density and ease of fruit harvest. At night, the leaflets close up.

The tamarind does flower, though inconspicuously, with red and yellow elongated flowers. Flowers are 2.5 cm wide (one inch), five-petaled, borne in small racemes, and yellow with orange or red streaks. Buds are pink as the four sepals are pink and are lost when the flower blooms.

The fruit is an indehiscentlegume, sometimes called a pod, 12 to 15 cm (3 to 6 inches) in length, with a hard, brown shell. The fruit has a fleshy, juicy, acidulous pulp. It is mature when the flesh is colored brown or reddish-brown. The tamarinds of Asia have longer pods containing six to 12 seeds, whereas African and West Indian varieties have short pods containing one to six seeds. The seeds are somewhat flattened, and glossy brown.

The tamarind is best described as sweet and sour in taste, and is high in acid, sugar, B vitamins and, oddly for a fruit, calcium.

As a tropical species, it is frost sensitive. The pinnate leaves with opposite leaflets give a billowing effect in the wind. Tamarind timber consists of hard, dark red heartwood and softer, yellowish sapwood.

Tamarind is harvested by pulling the pod from its stalk. A mature tree may be capable of producing up to 175 kg (350 lb) of fruit per year. Veneer grafting, shield (T or inverted T) budding, and air layering may be used to propagate desirable selections. Such trees will usually fruit within three to four years if provided optimum growing conditions.” [source]

Tamarind paste has a wonderful sweet-sour flavor that can be added to as many dishes as you have creativity for.

Just to name a few. 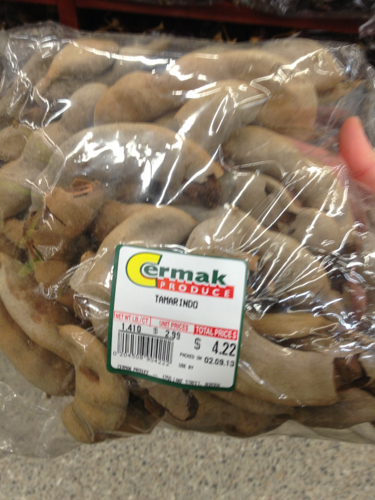 I started with almost a pound and a half of tamarind pods. After the shells are removed it’s probably closer to a pound. 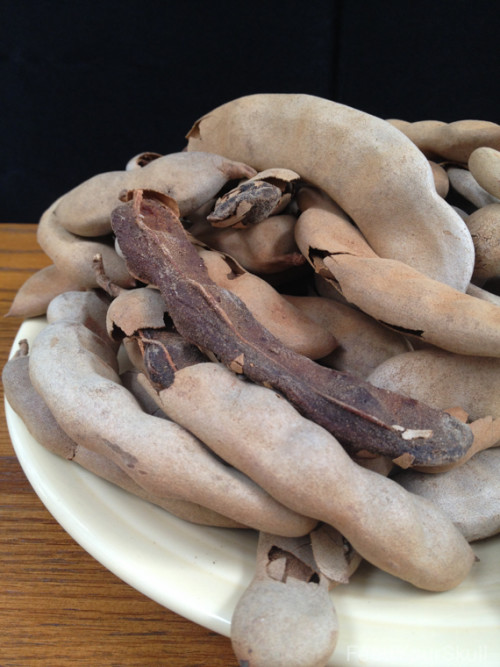 One of the tedious steps is removing the shells, it really seemed to take forever. If you press on them, they crackle and then you can start to peel them off, but the chunks are never as big as you want them to be. I found it easier to do this step over the garbage (a newspaper could work too). 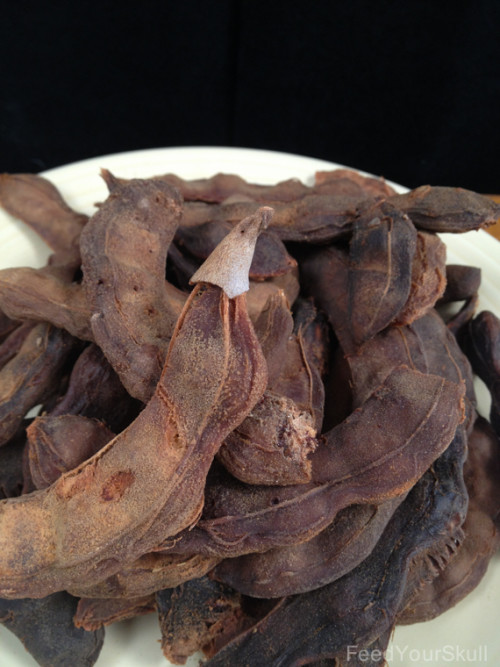 Once you have the shells removed, you will be able to see four or five roots running down the sides. It would also be ideal if you can remove these with a paring knife. Some parts are super easy and other parts are really tough and sticky. I ended up leaving a lot on. 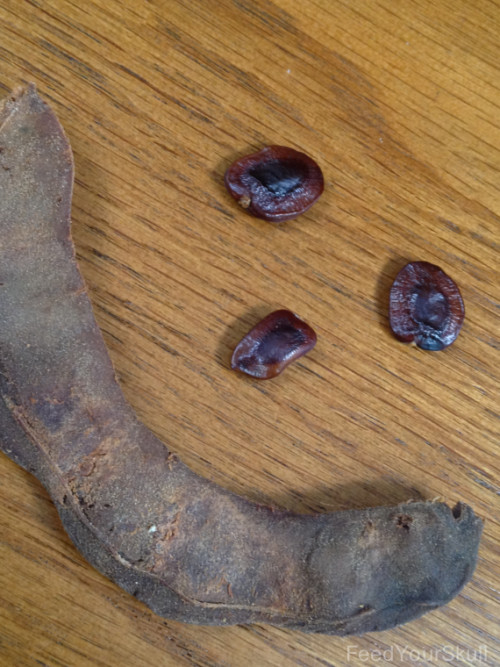 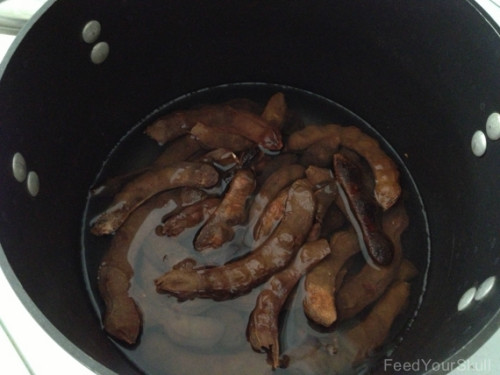 Now it starts to get fun. Add your peeled pods to a saucepan and just barely cover them with water. Bring to a rolling boil on high heat and boil for a few minutes. Turn off the heat and let them sit for 10 minutes—covered. 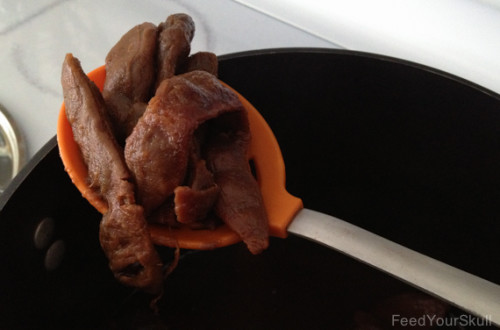 They should be softened now and look rather interesting. Cough cough. 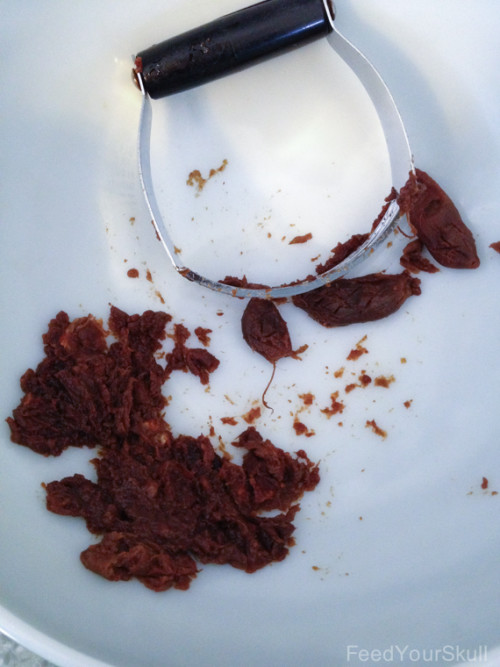 Remove the seeds and any additional root string. I did this by placing a few pods in a bowl at a time and pressing on them with a spoon or pastry ‘cutter’ to squeeze out the seeds. There’s the fleshy tamarind on the outside and inside along the center of the pod are the seeds. Surrounding the seeds is a small but tougher skin but we’ll get to that in a bit. For now, just remove the seeds and set them aside. 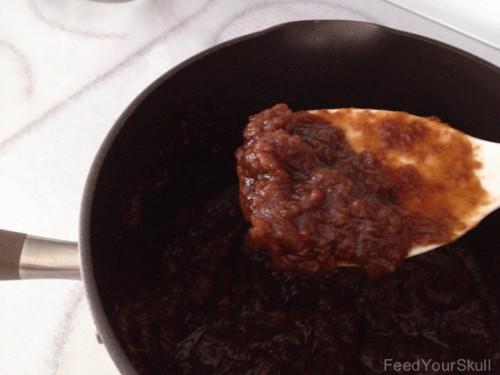 Once you have removed all of the seeds/roots, place the paste back into the saucepan and add about a cup of apple cider vinegar and 1/3-1/2 cup of sweetener of choice. Bring to a boil on medium-high heat, reduce to a simmer for 15-20 minutes until it thickens into a paste. 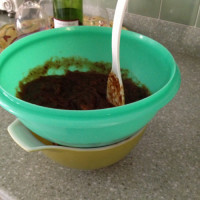 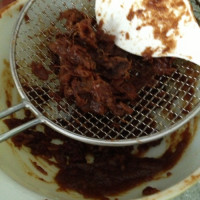 Separating the paste from the tougher parts. Yes, there are still a few more things to remove.  I did this a couple of ways. I traded off between using a colander and bamboo skimmer/strainer. Put the paste in either one and press with a large spoon to squeeze the tamarind paste through the holes. 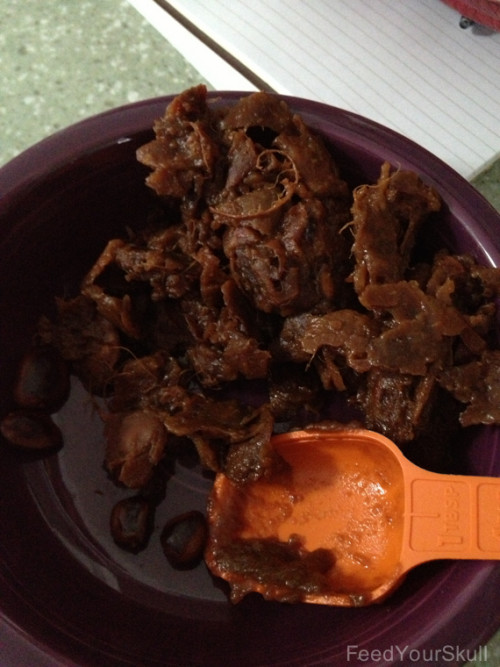 Leaving you with this kind of tough/woody mess. 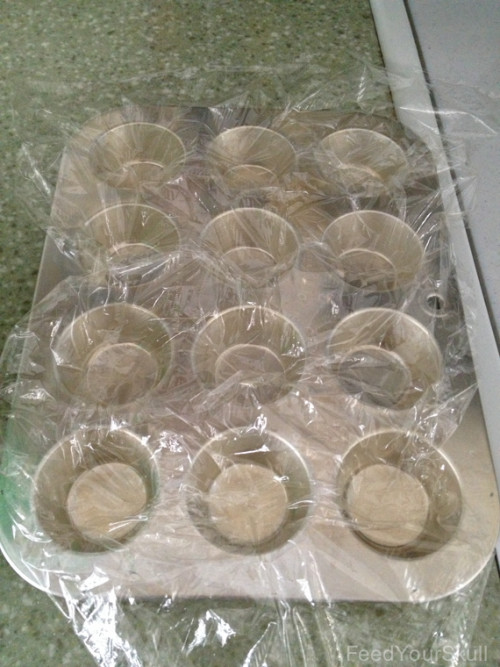 Now the fun part! I lined a mini muffin tin with saran wrap and was able to fit a couple of tablespoons of paste in each one—which is perfect for adding to a recipe. 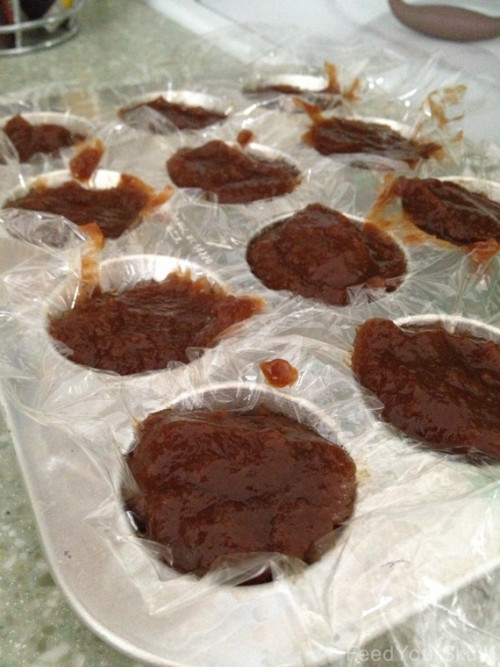 Place in the freezer and allow to freeze for several hours or overnight. When frozen, remove from the muffin tin and saran wrap and store in a ziploc bag or another freezer-safe container. 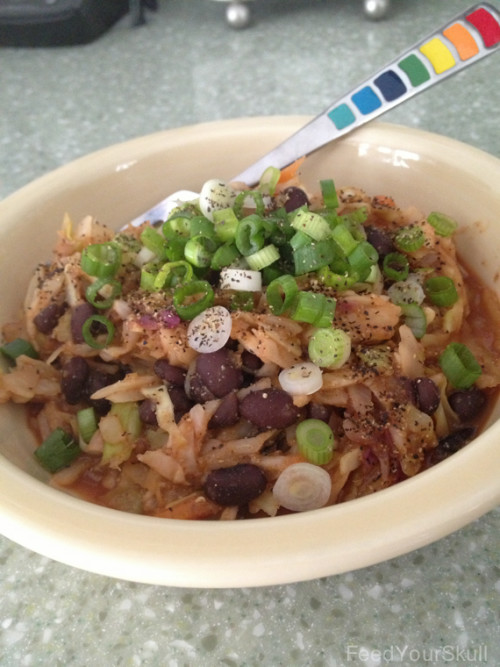 Next time you whip up a little stir-fry or veggie sauté, throw in a pod of paste. It adds a great tangy flavor to whatever you are cooking 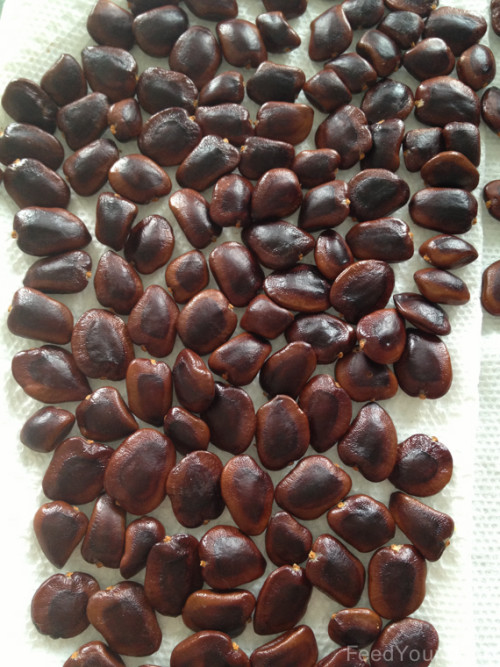 You might be thinking we are done, but I like to see if I can use up ALL the bits! I thought the seeds were absolutely gorgeous and just had to do something with them. Mostly because they are a very tough seed. I washed and then allowed them to dry and was surprised at how rock-like they are. 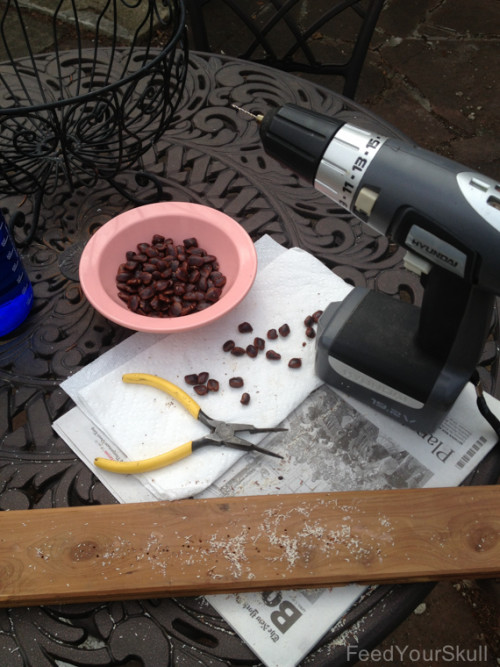 You already know that I love to use power tools. 🙂 I thought I’d turn the seeds into jewelry? I just really wanted to use the drill on an unreasonably small object. If you do this, place the seeds on scrap piece of wood and pick out an appropriate sized drill bit. 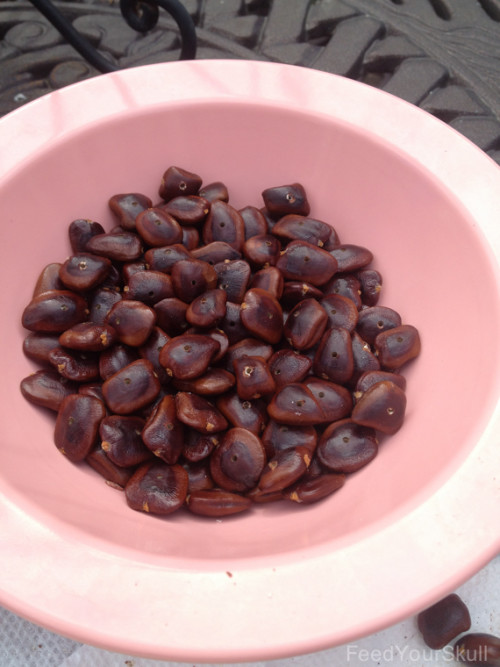 I would have loved to drilled these through the side versus the front but didn’t have a good vice-grip or way to hold them tight and safe. I was probably being risky enough holding each seed down with my finger and drilling – it drove my friend nuts. 😉 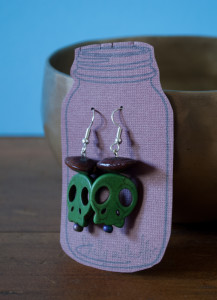 And all of a sudden you have awesome earrings!

The next time I make the paste, I think I will add a splash of tamari to the acv and sweetener – just to see.

Thank you for reading and I would love to hear your favorite way to use tamarind paste! Let us know below. xoxo