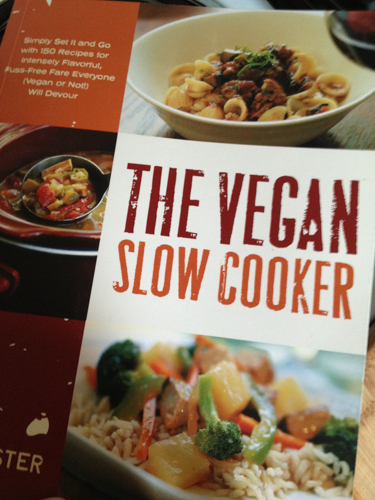 I bought Kathy Hester‘s book, The Vegan Slow Cooker, this past January, a few months after committing to veganism. I was excited to delve into and open the door to vegan crock-potting.

And I’m still excited! Kathy’s recipes (at least from the seven I made) are calls to the comfort food many of us grew up with.

Before getting into all the chapters, I highly recommend reading her slow cooker basics at the beginning. Especially if you’re new to slow cooking. Some slow cookers run hot, some don’t, some vegetables have more water in them than others and so on. As she says, none of this is bad but you need to have an awareness so you can adjust recipes or slow cooker settings.

I own a Hamilton Beach slow cooker that houses 3 different sized bases (two, four and six quarts). I found it at Kohl’s many years ago, sold it to a friend when we moved and repurchased it this last year. I love it.

Kathy didn’t know that I could pick from 3 sizes of pots, so if you’re like me in this situation, go with the 6 quart (largest) unless the recipe states otherwise. 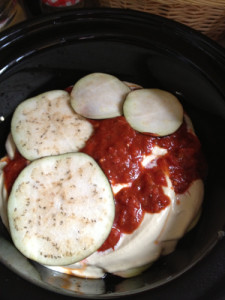 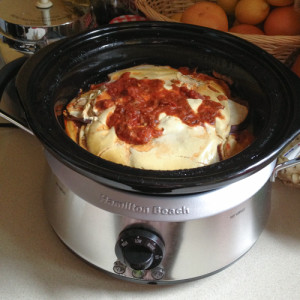 Of the recipes I made, this is the only one that’s from way back in January. I still remember how delicious it was. This is the Italian Eggplant Casserole with Cashew-Tofu Ricotta (page 94). Scrumptious layers of cashew cheese, fresh eggplant and marinara sauce. Suggested serving is over pasta but we ate as is and it was delicious.

The only night-before or pre-step in this one was making the tofu ricotta but you could certainly make it right before, it’s not time-consuming at all. The night-before suggestions allow you to do the dump and go the next day. 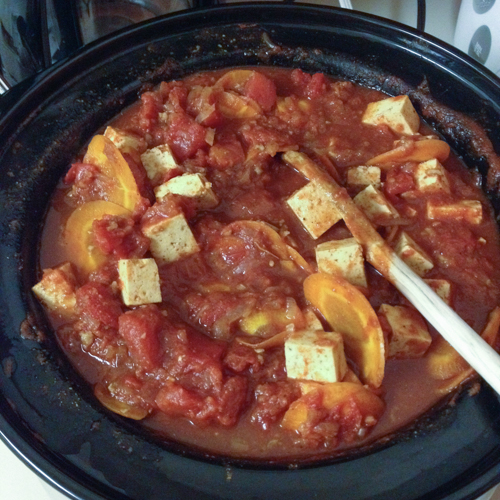 Reintroducing myself with her cookbook the end of September I flagged a bunch of recipes that I could make with stuff I had on hand. Most of them were soups but this Butter Chick’n (page 85) curry recipe is from the Steamy Stews and Curries chapter.

I added some carrots we had on hand to add more veggies into the mix and we served it over stove cooked brown rice.

Another winner. Jeremy always along for the ride, loved this one too. I loved the generous addition of garam masala, it has easily gone from one of my least used spices to showing up in things I eat more consistently. Recently on peanut butter toast with pears. 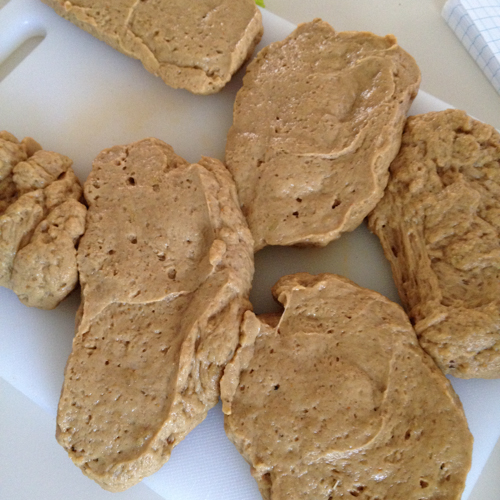 Next up was a recipe from the staples chapter, Chick’n Seitan (page 21). It was my first time making seitan, pronounced say-tan. As Kathy states in her book, crock pot seitan “…is wetter than what you buy in the store. It’s especially made for cooking again in a slow cooker recipe. It is not good for grilling, but it can be used in other recipes that call for gluten.”

Many of the recipes call for her recipe of beefy or chick’n seitan which requires a 2-3 hour slow cooking time. You can make ahead and freeze for future recipes or sub in extra vegetables or store-bought meatless product like tofurky or field roast to save time.

I’m trying to think how to describe the texture. They look like doughy dumplings, they aren’t chewy, they of course hold together and are a little freaky to handle at first. Slippery and slimy like raw meat ::makes weird face::. They are seasoned similar to poultry seasoning so they have a nice light chicken broth flavor.

I personally don’t know how often I would make them. I would stick to substituting in vegetables or store-bought meatless products just for time. I like the dump and go recipes not the ones that take more than a day of planning. Fun to try though for sure. 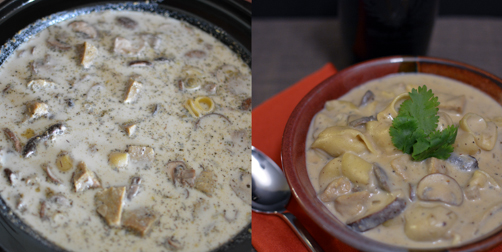 The seitan from above was used in this next recipe for Chick’n Mushroom Casserole (page 93). Delicious! This was the most comfort food of the recipes I tried. I skipped the salt and added tamari seasoning instead and let me tell you, the sauce could have easily been used for green bean casserole. Wonderful!

I found that I had to add 1/8-1/4 cup of flour over the 2 tablespoons suggested to get it to thicken properly but rest assured we both loved this. We had it with a smoky porter that night. Perfect pairing.

This recipe called for making the cream and sautéing the vegetables the night before. 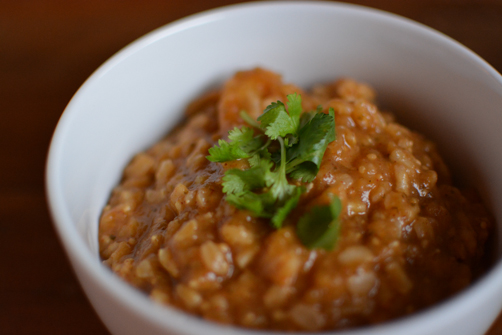 Next up is the Chick’n Verde (page 156). This picture is from the second day when we added rice. We enjoyed this in flour tortillas and just eating it out of bowls with a spoon. 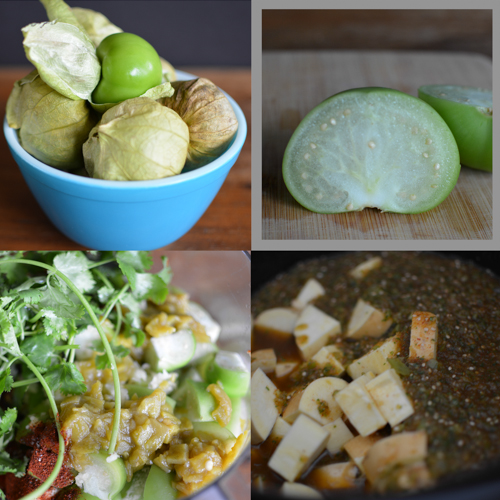 It was fun to use tomatillos for the second time in my life. I had bought them to make salsa but then ran across this recipe. Happy coincidence.

I used sweet potatoes instead of seitan, in the same quantity but the sauce was very saucy, so you could easily double the sweet potatoes if you are doing that. We also added cooked rice to thicken it up.

It was very good, a little on the vinegary side, for us. So I might use only a tablespoon or 2 of ACV and then broth for the rest.

I highly recommend using it as burrito or taco filling. So tasty! 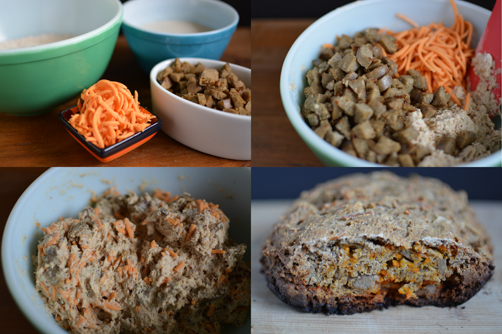 Not just bread though, it’s a fun savory bread. I subbed in applesauce for the oil and it handled it fine although I haven’t made it with oil, so who am I to say. 🙂

It smelled delicious cooking and tasted delicious too. I had to cook it a little longer than listed until the center was cooked which gave me a crispier crust, not that I minded. Fantastic! 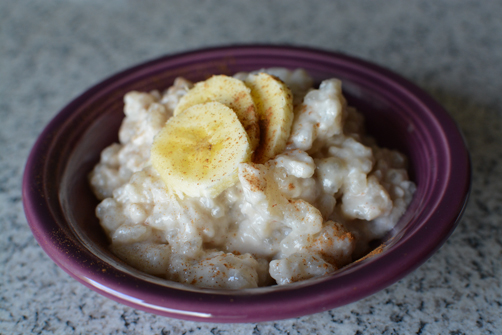 Last but not least, we have Tapioca Pudding for Two (page 207). This took me straight back to my childhood. Straight back. Every time I visited my Grandma, she would make me tapioca pudding on the stove. I loved it so much for it’s creamy strange gelatinous pearls.

We can all be relieved that tapioca can be made without butter or eggs and still hold the same qualities we loved about it as children.

Guess what else? I’m able to share one of the recipes with you. I was sharing so many of the pictures on facebook and getting people excited that I had several recipe requests. I contacted Kathy on twitter to see if I could share one and she graciously agreed. So find some tomatillos, you can make the Chick’n Verde.

The Night Before:
In the Morning:

What is your favorite thing to make in the crock-pot? xoxo