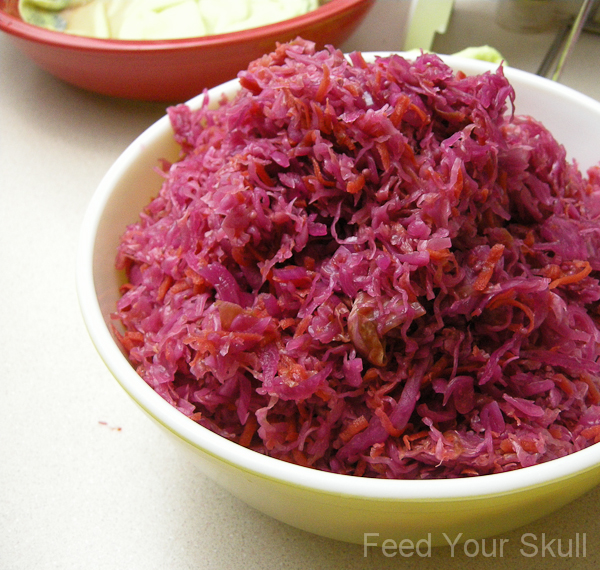 Welcome to the grand opening of my 9th batch of raw fermented sauerkraut. Nine – 5 liter batches in a little over a year. That’s some tasty creative fermenting. If you are interested in the recipe for this latest batch, I shared it a few weeks back. 🙂 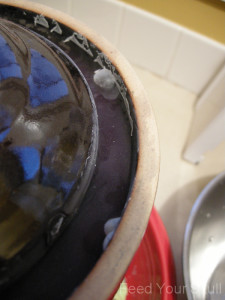 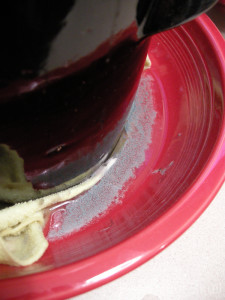 This might have been our most ‘interesting’ ferment to date thanks to the smurfs that zombified the outside of our crock. As you can see there is a white film that went all the way around the gutter and even encompassed the bubbles as they formed and around the base of the crock was zombie fluff or mold.

I was heebie jeebie skeeved out!

So much so that I ended up opening the crock about 5 days early (not too bad really).

I have a few theories to explain this somewhat scary effect that leads to ‘oh hell, how did I mess this batch up’ thoughts while the ferment is still going on.

I would like to first assure you that the batch turned out DELICIOUS! Scary surroundings aside this just goes to show how superior the fermenting crock is at protecting the fermentation. This experience also happens to coincide and perhaps shed a little light on a question I received from Doug regarding his latest ferment and how much water is too much in the gutter.

This happened to be our first ‘winter’ batch in our new apartment and because of this I paid a little more attention (peripherally) to the ambient temperature.

Our new apartment is in an older building with wood floors, uninsulated windows, and 2 small electric heaters for the main rooms. On average it is much cooler in this unit versus last winter where we had the windows open year round.

While fermenting can take place – easily – between the 60 – 70 F range it’s generally known that the ferment will be off to a better start if the temperature is in the upper 60s or low 70s during the first few days.

Normally, I don’t pay any attention to the temperature but in our new abode we often sweater and slipper ourselves up to avoid the cost and noise of running electric heaters, meaning it might be 56F in the apartment. Too cold in my opinion.

So, for the first few days we kept the heater in the room of the crock on, this kept it always between 68-72F. After 4 or 5 days I didn’t really pay any attention.

The magic of the Harsch crock is it has a gutter that goes around where the lid is placed – that you keep filled with water. This forms an airtight vacuum seal that allows air out (cute little burpy bubbles) but doesn’t allow air in. Keeping the ferment environment safe from outside microbes and bacteria.

This time around our gutter was high maintenance! We were filling the gutter up sometimes 3 times within a morning/day, sometimes even within 15 minutes of each other. Where does the water go?

Some of that water evaporates while some becomes pulled under the lid by the vacuum effect. This ‘gutter’ water does not necessarily go into the sauerkraut and brine – I think.

So, Jeremy and I both filled, filled and exclaimed over how much water we were adding when after a week or two it finally  stopped. A few days passed before I even noticed that the crock was giving all of that water back – which is why I recommend resting it in a bowl or on a tray. A few more days after that is when I noticed the mold. Eww.

I had a variety of thoughts but wasn’t too plussed and was determined to bide the time until the ‘open’ date. During the last week is when the film formed on the gutter water. A combination of interesting and gross.

Here’s what I think happened.

This is the most vegetable by weight I have put in the crock since our first batch – about 11 pounds. I’d say on average I aim for 7-9 pounds for a comfortable fill in a 5 liter crock. I knew it was full but I still forced the stones in and thought nothing more about it.

What happens though when it’s a little past comfortably full?

The vegetables are still breaking down and releasing water which is added to the already decent amount of brine, making the crock even more full than the state I left it in. I never took physics but it does come into play here. The sauerkraut is starting to release carbon dioxide which escapes out of the gutter (the burps) and creates a little vacuum/suction pulling some of the gutter water under the lid.

What does a too full crock have to do with it?

I think because there’s less room in the crock it means there’s less space for the air to hang around which means it’s pushed out of the crock faster (more bubbles) which would then lead to pulling more water in – only to the point it can before it is at capacity and pushes all the volume out i.e. much of the water.

Which finally explains the mold and white film – both a result of vegetable particulates in the brine. I’m pretty sure the white was a non-harmful kahm yeast.

“The appearance of a white, thready yeast, commonly known as kahm yeast, is often a byproduct of the lactofermentation (or pickling) of certain vegetables, usually the result of exposure to air. Although harmless, it can give pickled vegetables a bad flavor and must be removed regularly during fermentation.” [source]

If you stayed with me this long, you’re great and I’ll name a star after you.

After all of that horrifying zombie mess on the outside, what did the inside of the crock look like? 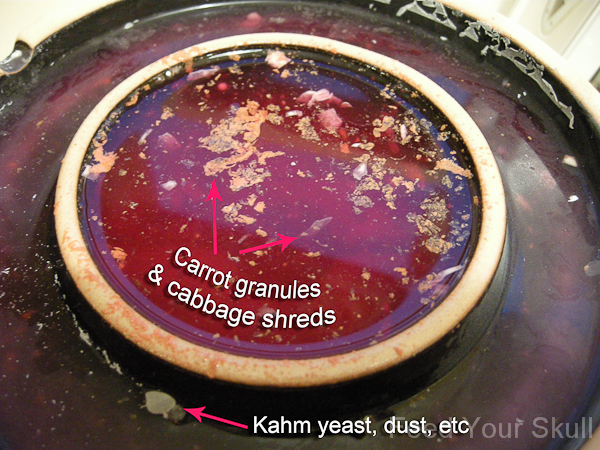 Everything looked absolutely 100% perfectly wonderfully safe! Awesome. See how full the crock ended up? I drained/discarded the majority of the top water/brine until I got to the stones (a baster or 1/2 cup measurer would be perfect tools for the job). Then proceeded to remove the stones, cabbage leaves and all of that beautiful delicious kraut. I tried it right away – of course. 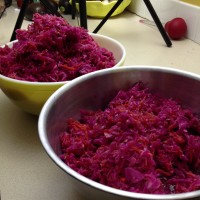 So, keep the gutter full of water. If you notice it became dry but aren’t sure when, don’t fret just fill it back up with water and carry on. As long as you don’t move the lid (which would break the ‘seal’) everything will be fine! As far as filling it too full, I’m sure this will happen again. I just won’t be as alarmed if the outside is looking a little zombie-ish. 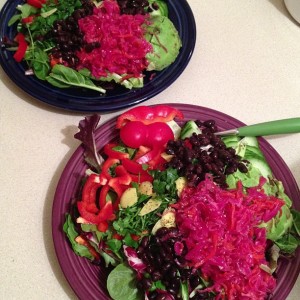 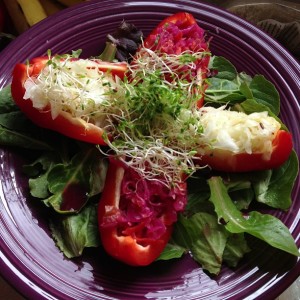 Have any zombies or smurfs attacked your crock of kraut?