I received an email from Twitter that Homegrown Smoker had followed me. It makes sense, I list that I’m in Portland and the word vegan is in the bio, as in high-vegan. Sometimes I click on the people/companies that follow me, sometimes I don’t – I don’t often return the follow because I still want my river of news to be my river.

When I did check them out a little bit further and maybe it was their name or the words ‘vegan food cart’ but I was intrigued. I checked out their tweets to see if I thought they were relevant and I wanted to follow them. Then it happened. The moment where they had me.

One of their tweets mentioned….wait for it….STFU puppies!! You know, instead of hush puppies. I don’t know why, but they had me. It’s been a waiting game the last week and a half for Jeremy and I to get over there and try them out. They are open Monday – Friday 11am – 4pm and are located at 4th and College.

Even though I don’t consider myself vegan, I always want to ‘vote’ with my few dollars on things that I feel are important, like veg*n options. This was one of them.

Since they are a 100% vegan food cart it meant there were a lot more items to look at than just one small corner of a board, like at a regular food cart. Win! Here’s the menu: 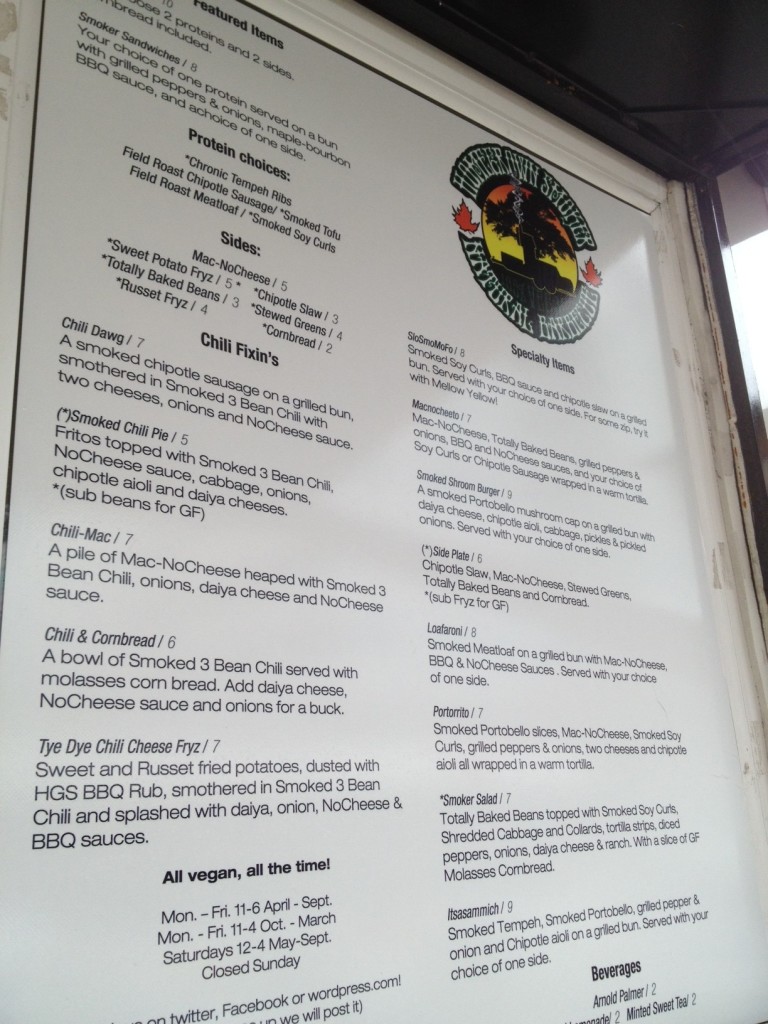 This is also one of those carts that has options for the junk food vegan or the healthier vegan. Find your balance.

My husband, Jeremy, found his with the Smoked Chili Pie. See the top picture below…you can’t miss it, its in a Fritos bag! It might not be that healthy but we thought it was really cool that it was served in a Fritos bag, at least its sustainable. Besides the Fritos, the rest of it is up to par with vegan chili, freshly shredded cabbage, scallions, and their ‘no cheese’ sauce.

I chose the smoker sandwich with tempeh because I was really feeling barbecue and a side of STFU puppies, which we split. The sandwich was really very good and next time I’ll ask for a side of bbq sauce, ’cause that’s how I roll.

How were these STFU puppies you ask??? They were AMAZEBALLS!!! There are not enough exclamation points in the world, okay there probably are, I’m just being dramatic.

These were fried, as in he reached in a tub with an ‘ice cream’ scoop and then plopped that into oil and they were so delicious. They also weren’t the fried that’s dripping with grease or the fried that means you’re biting into something juicy greasy. I don’t know how they worked their magic and that’s okay, just keep making them and put them on the menu for good! The were perfectly dry and crispy on the outside and steamy warm on the inside.  I haven’t even mentioned the ‘roll your eyes in the back of your head’ sauce they were served with. It was somewhere between a cajun po boy sauce with a little tartar flare. I was dipping my sandwich in it, it was that good.

So, if you live here in Portland or you’ll be visiting and happen to be looking for a vegan food cart, definitely check them out. We spent a tasty $15 here. Very tasty.