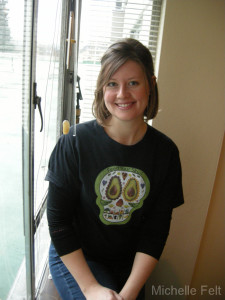 We had family in town during the first week in December had a great time showing them our hangouts and a lot of the downtown and Alberta street areas. Disappointingly we didn’t get to any city trail hiking and there’s so much of that! Good reason for another visit. We did however make it out to the Oregon coast and had a beautiful brisk SUNNY day of wandering the beach and taking in the scenery. If I can find the beach photos, I’ll share them at that point in time. Until then we have some fun ones of the downtown area.

The above photo of me in the first Feed Your Skull shirt was taken before we headed downtown for breakfast. I was wearing skulls, my skull/food art out in public. !! This was the 5th photo Jeremy took before I decided it could be shared publicly. Fat face photos are not generally shared…publicly…or at all. 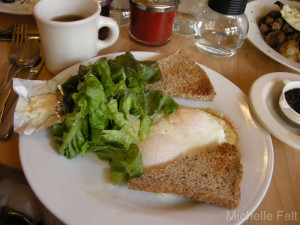 We started off one of the mornings with breakfast at Bijou Cafe located in the Old Town – China Town area. Love them. We first ate there on our ‘Do we want to move to Portland?’ trip of September 2010. Their food is delicious, the atmosphere relaxed and we were even lucky enough to have excellent service. I believe in the 3 times I’ve been there I’ve ordered off their ‘specials’ board twice and the menu this last time. All are good but definitely ponder the specials – you won’t be disappointed. In December (the above photo), I ordered 2 eggs over medium with whole wheat toast and a side green salad. Gotta get my greens on! Also, they make their own ketchup and preserves – which isn’t a surprise considering the majority of their menu is sourced locally. 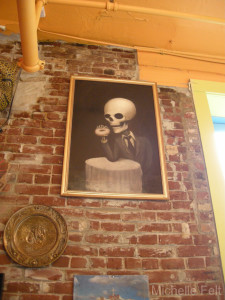 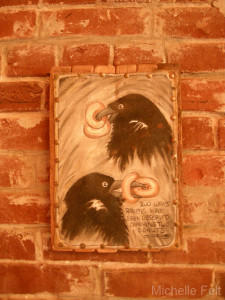 Leaving Bijou Cafe we wandered North and I’m not lying when I say we ‘happened’ upon the famous Voodoo Doughnuts. It was pretty impossible to pass up this opportunity. There were skulls on the wall and other cool artwork and Metric playing appropriately loud. I decided to pretend I was sightseeing too and joined in with the ordering. Thought I was better off ordering the apple fritter instead of a doughnut topped with sugary cereal, except that the apple fritter was practically the size of my head. I took 3 bites and was really full and could feel the sugar take over. Jeremy graciously offered to eat the rest of it for me. I gave him a glaring territorial look and we continued walking. Since no one had spare ziploc bags – lol – I waited until everyone finished their doughnut and used their wax paper to wrap mine up and stick it in the back pack, away from Jeremy’s generous intentions.

I must make mention of their hilarious donut names: McMinnville Cream, Maple Blazer Blunt, Texas Challenge (= to 6 regular doughnuts), Cock-n-balls, and Old Dirty Bastard. I had tremendous fun hearing my father-in-law say the last one, I promptly took advantage and pretended I hadn’t heard him. It worked the first 2 times but not the third. 😉 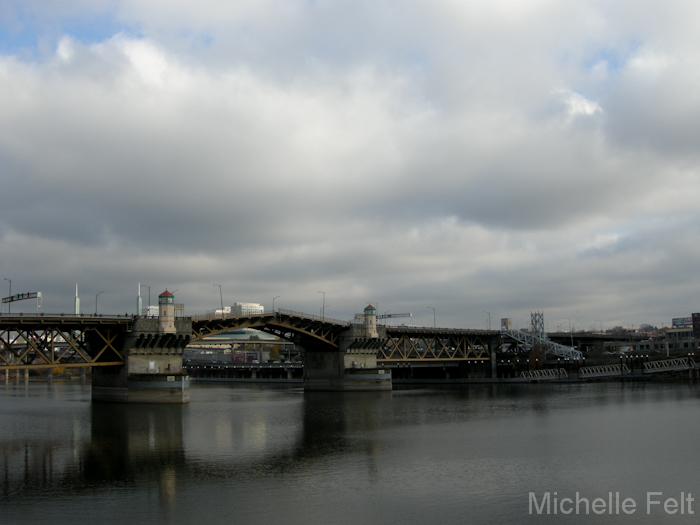 We then walked towards the Burnside Bridge along the waterfront and got to see it open. I am totally easily entertained. Especially when it comes to bridges, dogs, and ‘strange’ people. 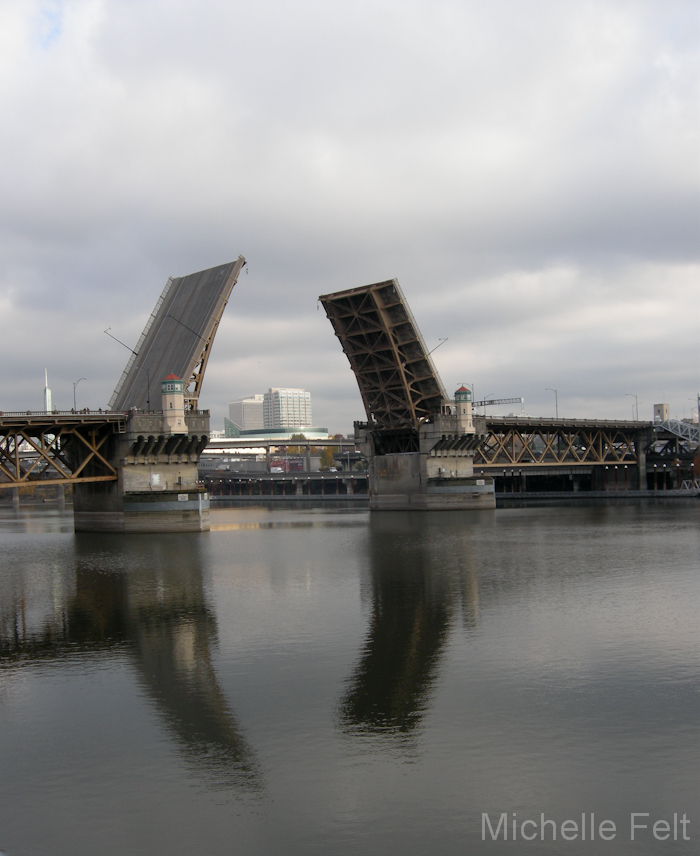 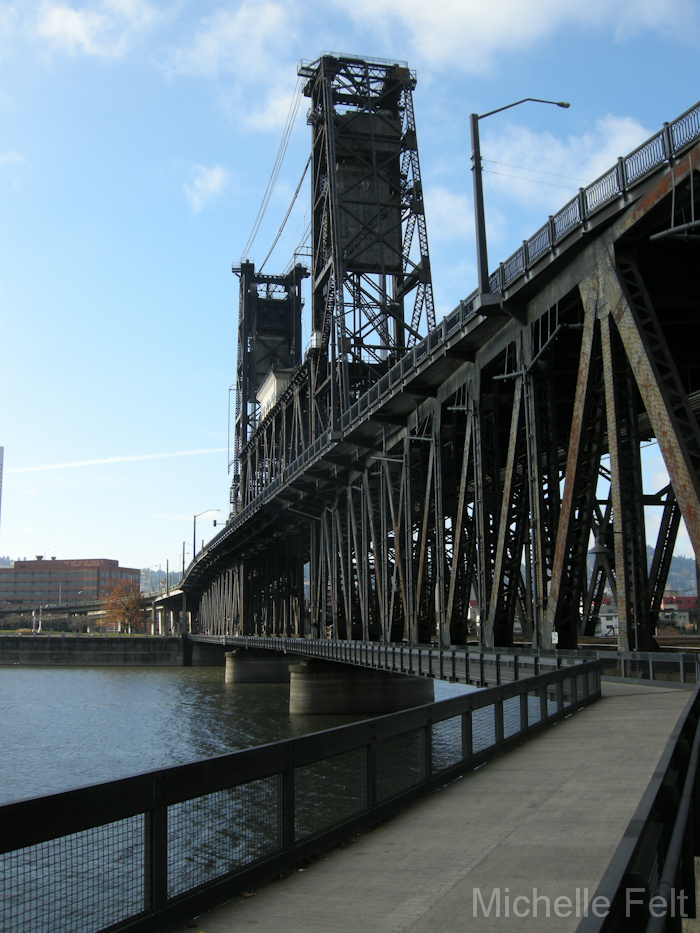 Once over the bridge we walked along Portland’s ‘The Esplanade’ path going along the Eastern waterfront North to the Steel Bridge. 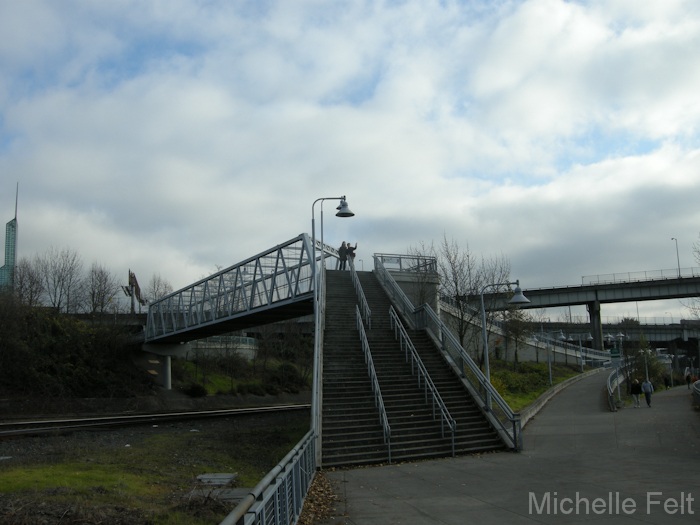 Mom-in-law and I ran up these stairs and back down. Damn sugar, get out of my body. 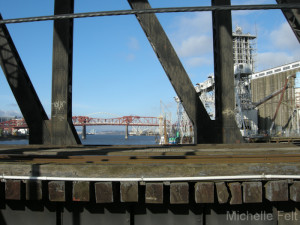 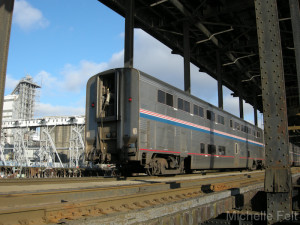 Hell yeah to being  okay 20 ft away from a train as it goes by – all while on the Steel Bridge. Have we mentioned this is our favorite bridge? I must mention that it is sunny way more in Portland than people have let on. Sometimes I think its a conspiracy, so people don’t want to move here or because they’re spoilt and haven’t lived through a Chicago winter. Maybe both. 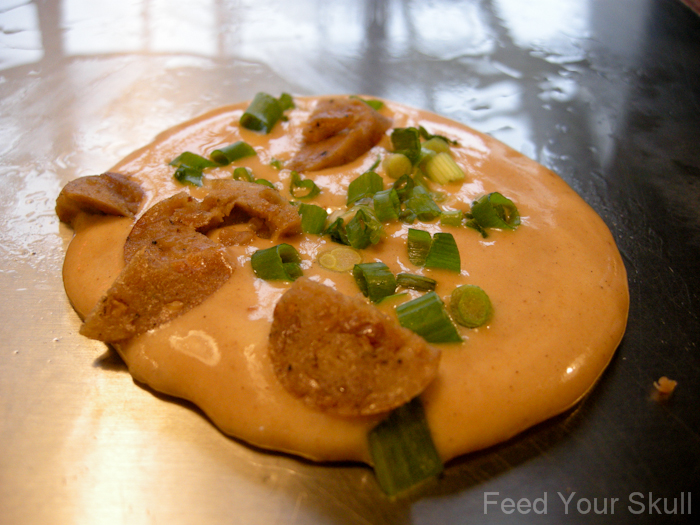 Later that week we met up with a 2nd cousin over at Slappy Cakes. That post can be read here.