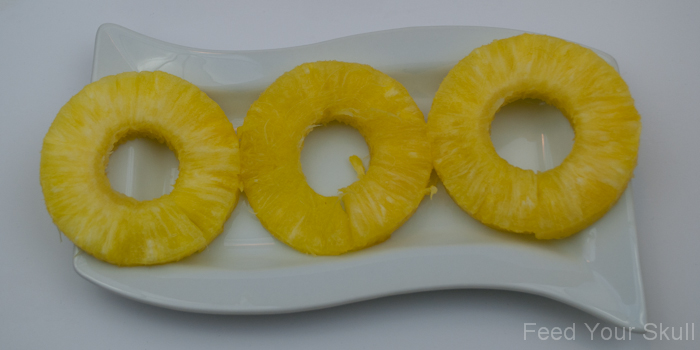 Have you wondered how to make pineapple rings or even how to cut a pineapple? You’ve come to the right place. I have a long torrid affair with pineapple.

It goes like this: I liked it – became allergic to it – and because I like to torture myself by trying it off and on over the years, I now know I’m not allergic anymore – and now pineapple and I are back in love.

There are two ways I love to cut pineapple and it really just depends on my mood or the size of the pineapple. The first way to cut a pineapple is using just a knife and everyone has one of those. Check out that post here. I like using the knife method on larger pineapples because there’s less fruit waste. The pineapple corer is about 3 1/4″ in diameter, so a pineapple larger than that will have fruit along the skin that is good but doesn’t get cut. There’s a way to get that too – we don’t want to waste any, after all. 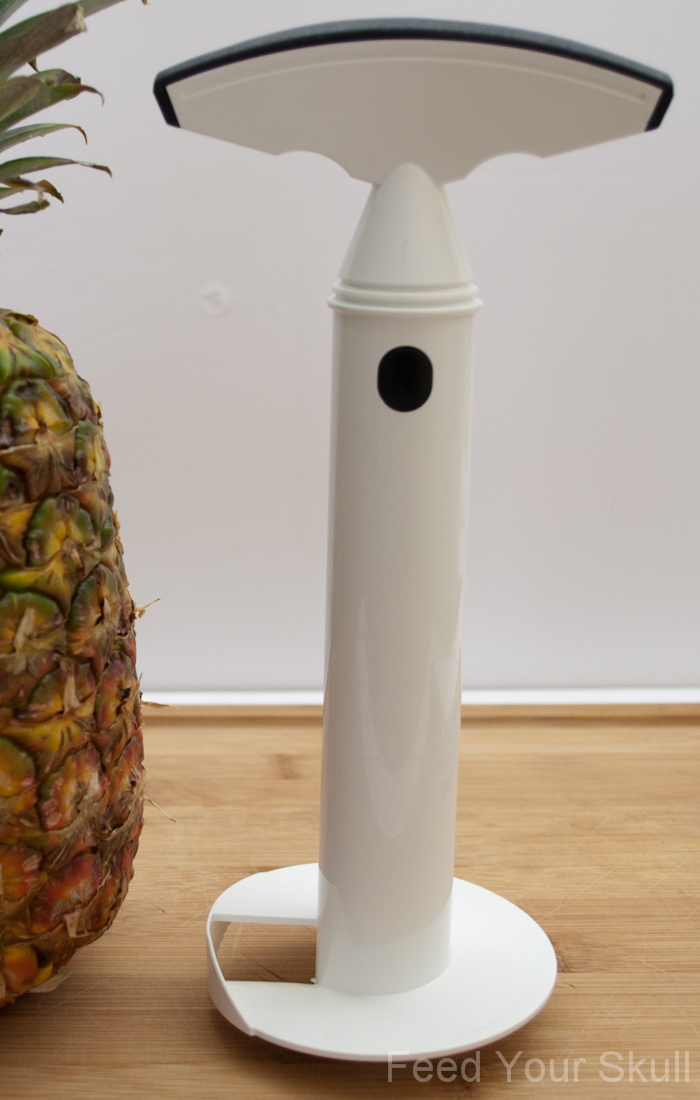 I still remember using the pineapple corer in front of my Mom and Grandma and loved how amazed they were. I felt like I was in my own infomercial…it makes rings, removes the core, it even dings! Okay, not the last one but still – it’s pretty awesome.

I bought this through Amazon, but I think some grocery stores carry them and also the kitchen gadget stores would too. They run about $8-9. As you can see I have the plastic one and it serves me just fine. There are stainless steel ones available too for just a few more dollars.

Cutting your own pineapple will be MUCH cheaper too. A small container of pineapple is about $5-$6, instead you could buy a pineapple for $2.99 or less and spend less than 5 minutes cutting it yourself and get double or triple the pineapple than in the container. I even freeze it for smoothies – yum! So, let’s get to it. 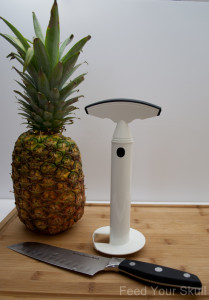 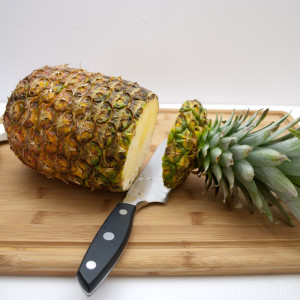 Start by making an even-as-you-can cut across the top, to remove it. As you can see from my picture its not even, but the intent was there – ha. 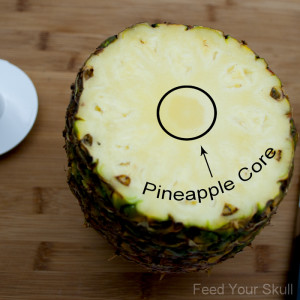 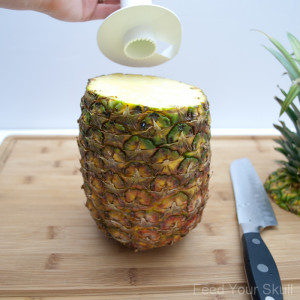 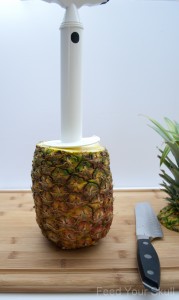 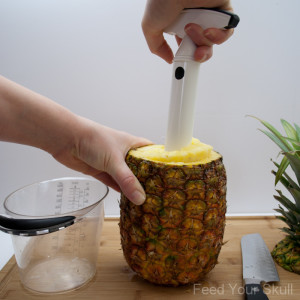 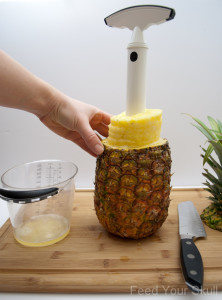 Once in place, begin turning clockwise while pushing down until you get to the bottom of the pineapple. Sometimes I slice off the bottom before I start and sometimes I don’t – it can make removing the pineapple easier. Once you think you’ve reached the bottom, while the corer is still in the pineapple – pick the pineapple up and tip it over a bowl to collect the juice. We don’t want to waste any. Now we can remove the pineapple, set it back on your cutting board and pull up on the handle. It should look like the above picture. 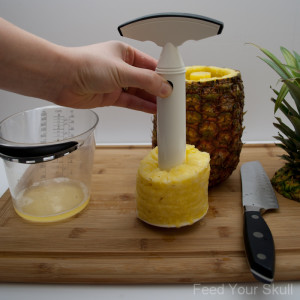 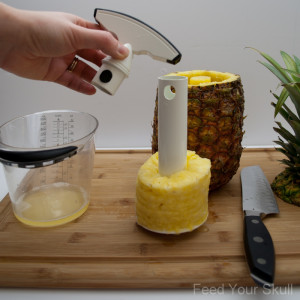 Now how do you get the pineapple rings off? Easy. Grip the handle and press the black buttons (there’s one on either side) and pull up. 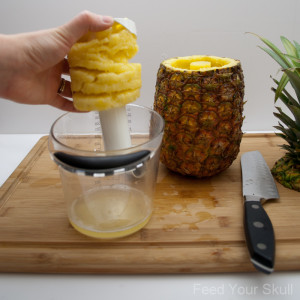 Now turn that upside down over a bowl or cutting board and push down on the rings sliding them off the corer. This is what’s left of your pineapple and with just a few more cuts you can salvage some more of the fruit from what was beyond the corer. 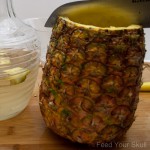 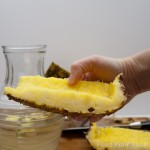 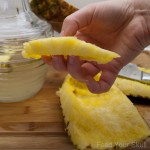 Cut the pineapple in half length-wise and as you can see from the side view there is about 1/2″ of pineapple that can be salvaged. Use a knife to slice or fillet this – I imagine it’s like filleting a fish – even though I’ve never done that. 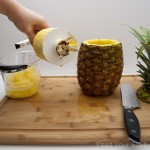 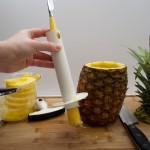 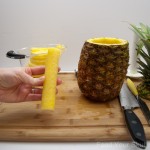 Remove the pineapple core from the corer buy using the blunt end of another kitchen utensil, for me it was a dull dinner knife. What most people don’t know is that you can eat the pineapple core. Just chop it and freeze/refrigerate it for future smoothies. Any blender, if chopped small enough, can tackle the core. The core is rich with bromelain, which has been shown to treat indigestion and reduce inflammation. I used two in my smoothie this morning. 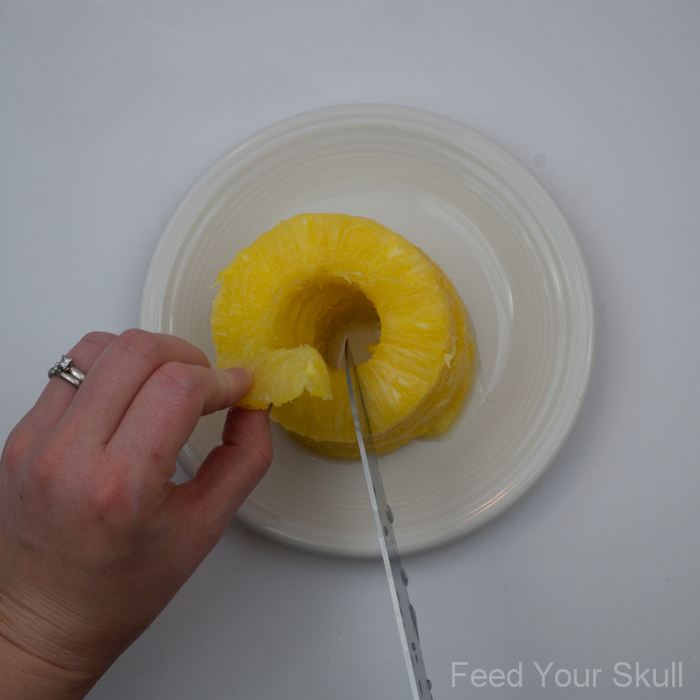 To make rings, find where your pineapple starts (see where I lift up) and make a cut straight down from there. 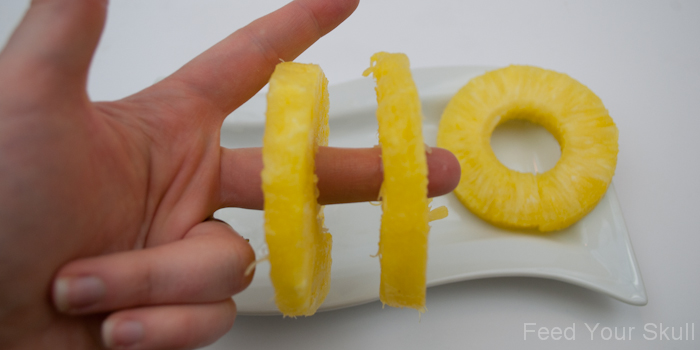 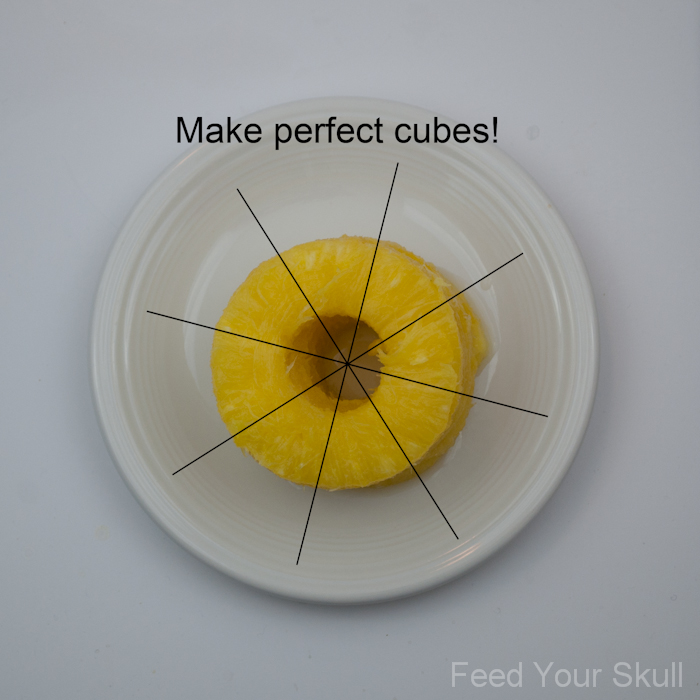 If you want cubes – just cut like a pizza! Easy.

Check out my post on making pineapple vinegar too, it makes good use of the pineapple skin. I hope this is helpful! Cheers to eating more fruits and veggies.