We really enjoyed our first Christmas in Portland and the great weather that accompanied it. Many days this past week were of blue skies and sunshine. I think the December here is at a record low as far as normal rainfall predictions go.

Jeremy received some GREAT news on Friday. He was offered a job with a web development company and is able to continue working remotely with the lovely addition of benefits. It has been almost a year since he left his job in Naperville IL and a year and half since I left my job of 10 years. Yikes! Be assured we have kept very busy with our ’round the world’ travel plans that ended up lasting us only 2-3 months through adventures in Ireland, England, France, and Spain, our desired relocation to the PAC NW, networking, making friends, freelancing, and setting goals for writing cookbooks/ebooks. Whew – I get tired and inspired reflecting on all of that.

We are excited that we are going to get to visit our IL family and friends sooner than we anticipated.

This is before my knees decided they hated me. That came on day 3. It was beautiful and wonderful and every other knowledge inspiring quote you could think of.

6 months ago I would have had a hard time believing that we could be this settled in our new home and have shared 2 holidays with wonderful people.

We woke up yesterday morning bright and early to see what ‘Santa’ brought us. Just so you have an idea of how unselfish my husband is…. we each bought things – as Santa – for our stockings. Where I bought stuff for his stocking as well as mine, he just bought stuff for my stocking and not himself. I chuckle but we both enjoyed some tasty dark dark chocolates from Cost Plus World Market. They have so many great ideas for stocking stuffers. I bought Jeremy a logic (much more affordable) dutch oven. He has been enamored making his own Irish soda bread and has really been coveting the idea of making the bread in a dutch oven. While at World Market, I was inspired to get him a bag of mix for chocolate chip scones. I envisioned him in the kitchen making a big ole loaf of scone and plopping it in the dutch oven. Little did I know he got me the very same bag of mix, knowing how much I had enjoyed the chocolate croissants in France this past year. What can I say? Great minds think alike. hehe. His gift to me was some Prada perfume (thanks Ulta for swooning us with that sample a few weeks ago) and a gift card to paper source. Win! Santa (J’s parents) sent a book called, A Discovery of Witches. I can’t wait to read this.

Christmas afternoon and evening was shared with Jeremy’s 2nd cousin and her family. We were also celebrating their daughter’s 1st birthday as she is a Christmas babe. We had a fantastic time meeting their bird, Cedric, a beautifully colored macaw. He could wave, say his name, and whistle. I could be entertained by animals for hours – trust me.

The table we sat at for dinner was filled with vegan and vegetarian goodies. I then realized that I had never sat down to an all veg dinner before with other veg inspired peeps. J’s cousin’s Mom, who is vegan, made a delicious ‘roast’ filled with stuffing that we ladled warm and savory gravy over. It was delicious, had the perfect texture, and looked great! She said she got the recipe from Post Punk Kitchen – so I immediately went over and left a comment about how awesome it was. The recipe is for Seitan Roast Stuffed with Shiitakes and Leeks. 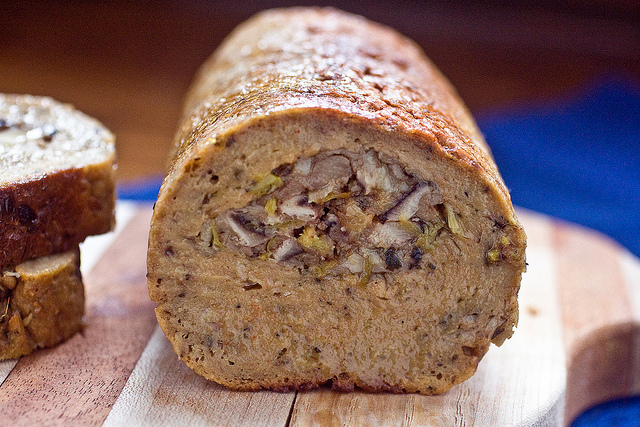 Another recipe from Post Punk Kitchen was also at the party – in dessert form – a tasty vegan cupcake. This had been made with a cashew fig frosting instead of the chocolate ganache and was topped with raspberries and blueberries.

There was talk of fermented sauerkraut, kombucha, homemade almond milk, dietary changes, the addictive attributes of cheese and also the pure joy of watching the cutest 1 year old lick the cashew frosting off her vegan cupcake. My love affair with the idea of vegan-ism grew just a little bit more that day.

Other ♥ from this week:

Okay that’s all the love for now. Off to watch Forks Knives before it has to go back to the library.

How was your Christmas?? What did you eat, meet, and love?